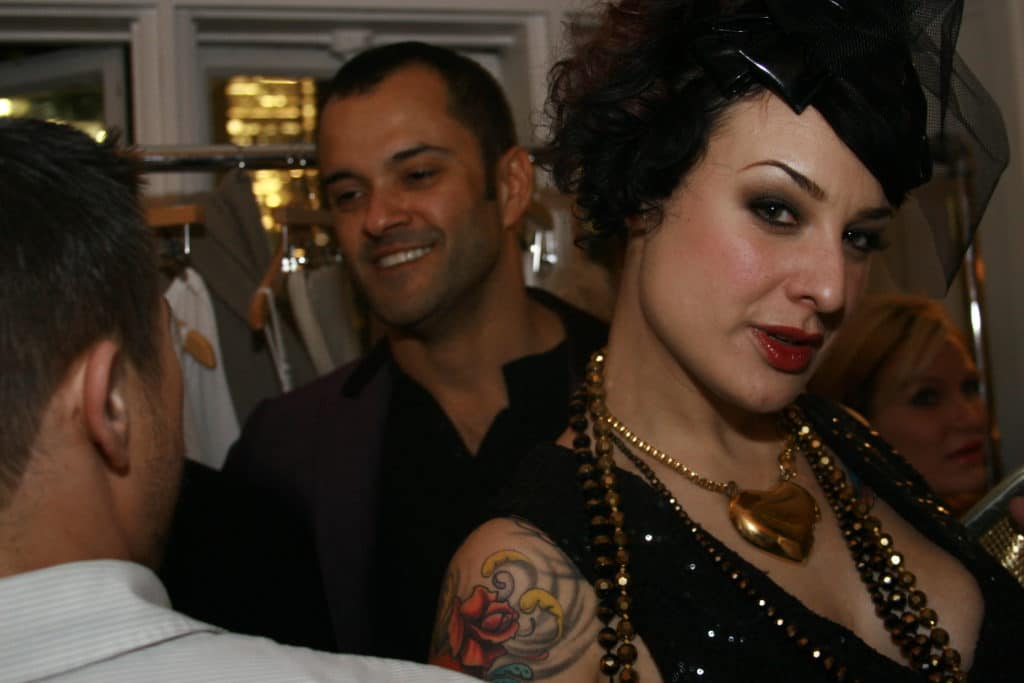 The penthouse is packed, the event is catered, and the tequila is spiced with jalapeños.  I’m at the Haute Hippie show and cramped elevators aside, someone’s doing something right. Beauties standing on bleacher-like rises wearing shimmering baby doll dresses guard a massive window that overlooks the more conventional Bryant Park, dancing and singing to 70’s rock anthems as the crowd looks on in awe. If the Manson family girls dressed this sexy they could have used their looks to kill. 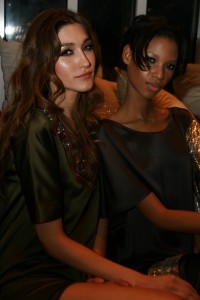 To my left a brunette, with razor sharp cheekbones wearing a leather bomber jacket, naturally beautiful and supernaturally charming, she reminds me of Marion Ravenwood. I ask her name.

It most certainly is… ”What’s your stake in this?”

“Everything sounds better in French, but you don’t sound French at all.”

“So let me get this straight.  You’re a fake French rock band?”

“So what’s your stake in this?”

“-A writer.  I’m writing a piece on the designer. Do you like the line?” 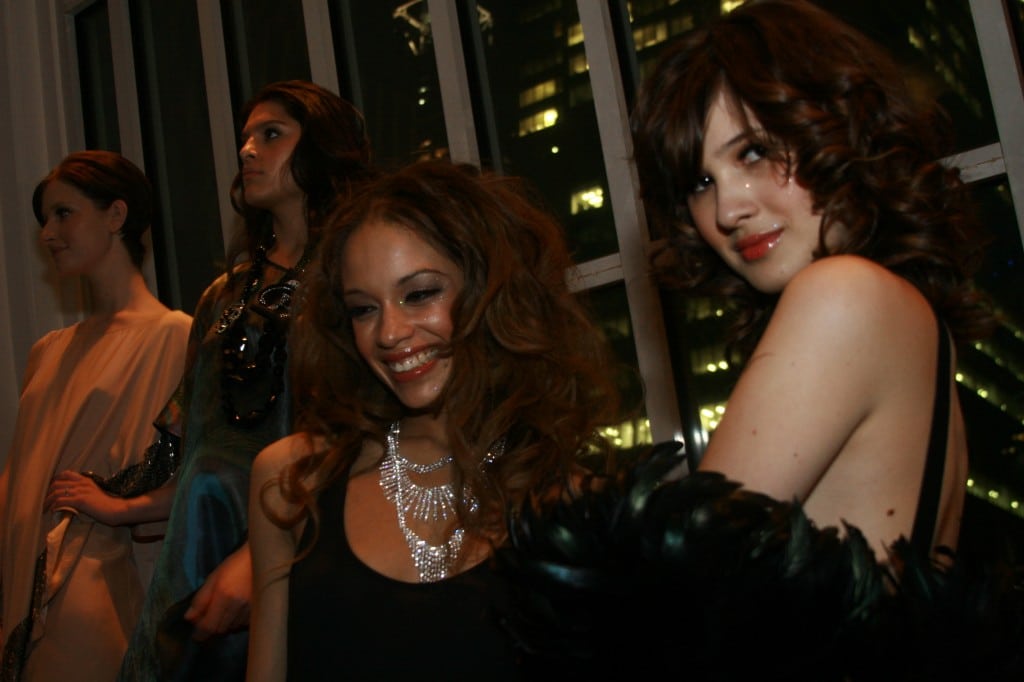 Cameras are flashing, a circle has formed and in the middle is a girl from our cramped elevator, break dancing to the cheer and applause of onlookers. Turns out she’s none other than Trish Westcoat-Pound’s daughter, the designer of Haute Hippie. It’s about now that I’m inspired to talk to Trish.

SCV: Thanks for taking the time, the collection is lovely, can you tell me more about it?

TW: It’s not something that’s limited to a specific season.  I was inspired by the socialites of the 70’s, when people knew how to travel in style. Trips to Africa and beyond.  It’s sexy, it’s cool.  It’s for the “global nomad.” Those beautiful girls with a passion for adventure, love and style. Haute Hippie is everything I want to be.

SCV: Yes, I know those girls. Why did you choose to show here in this way?

TW: This is actually the showroom, but I love it here.  It’s where the “Global Nomad” would live, so it was the perfect setting to have a party and show the new collection.

SCV: Where did all this begin?

TW: I’d been working in the industry for 20 years when I suddenly became unemployable.  I woke up on Christmas Day and said to myself, “Trish, you have two choices. Be happy or unhappy.” To take another job under some other designer would have been misery.  So I took a chance, and invested everything I had into this and it worked.

SCV: So this is your own investment??

TW: I took out a mortgage and went for it. I was living in a small apartment with my daughter, two designers and two dogs and there would be days when she would look at me like, are you serious? But it’s all paid off in the end.

SCV: Too right.  You’re fantastic. Who are the other designers? Tell me more about your daughter, did you teach her those moves?

TW: The other designers are Matt Demgen and Rachel Walder. My daughter is Julian, and she is definitely teaching me.  Sometimes she would stop me in the middle of work and assure, “Mom, that is NOT “haute hippie”.

SCV: She’s a star.  And I wouldn’t worry about wanting to be Haute Hippie or a global nomad, by the looks of things, you already are. One last question, who’s your valentine?

I leave her to her party and weave into the crowd.  This is an amazing woman.  Isn’t it about time we start giving credit where credit is due instead of lending it out to nobodies who are clamoring for fame with false promises?  Aren’t false promises what got us into the economical mess that we’re in? Why should it not be any different than the social mess of things?

Isn’t it time we start supporting the people in this city who really matter and are actually doing something? Are you really interested in people pretending to be fabulous? Come on! Who do you really want to know? A gorgeous blond who is risking it all, makes amazing clothes, and creates new terms like “global nomad”, or some Tia Carrera stand in that dresses like a Las Vegas hooker, stakes her claim to fame as how many facebook friends that she has, and parties with the bridge and tunnel crowd?

From atop a balcony I’m sipping my tequila on the rocks and staring at the stars above and below when Bonnie Day returns.

“Did you get your interview?”

“Yeah, She was great. Where are you off to now?”

“Back to Paris, you should come.”

“If you sound anything like Jane Birkin when you sing, baby, we’ll go around this blue globe like two beautiful nomads…” 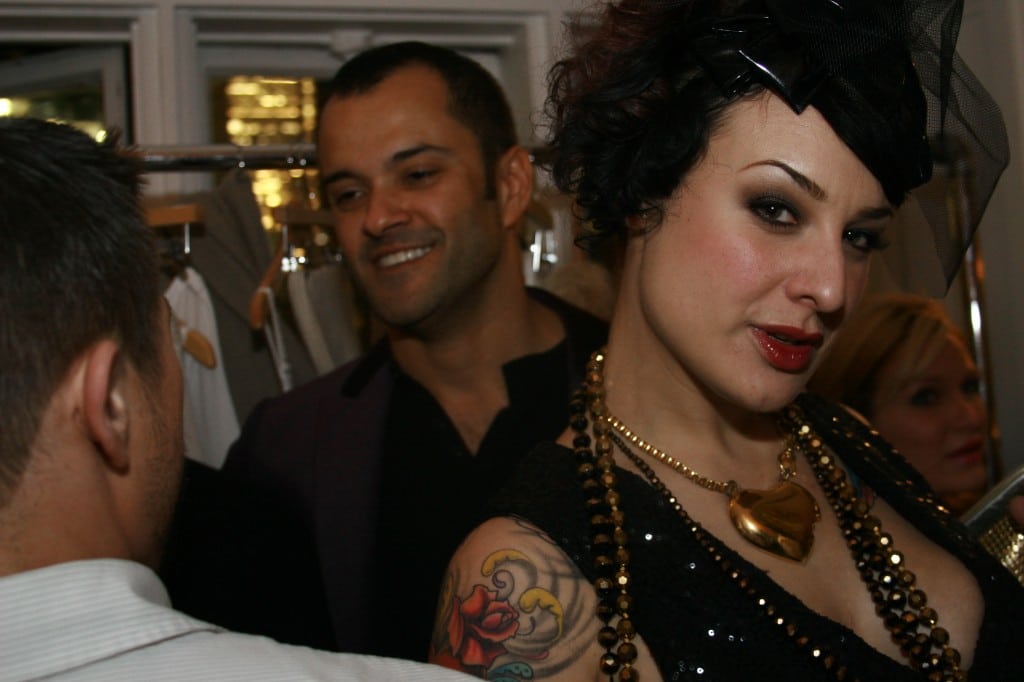