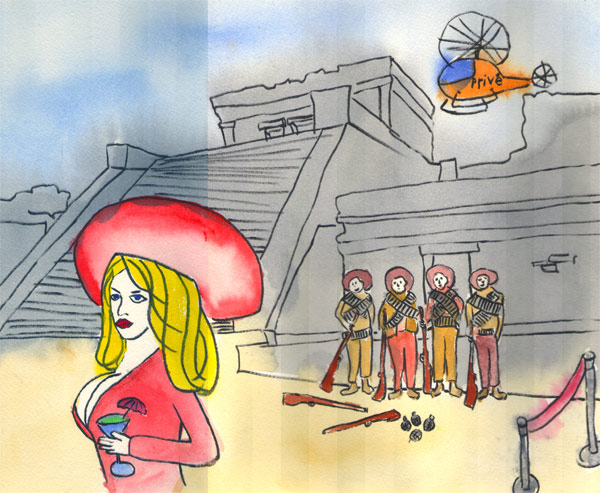 A Christmas visit to the Ritz Carlton on the Mexican Riviera doesn’t leave a girl much to think about. Surrounded by very big rocks and even bigger racks, it’s hard not to see the lips and tits correlation: the more the more seems to be the merriest equation.
Watching 350 cc’s of blow-up breasts and botoxed lips prance around with all sorts of men: the hot asshole types the twisted girl wishes she could make love her, old ones with face lifts she can’t imagine touching her, the greasy sausage-arm body builder types she would never want near her.. You have to wonder: if a man’s life’s a big penis contest and only the most inflated woman can help him win, is a woman who doesn’t reach for the plastic competing at her best? It’s a real American dilemma.

After contemplating this poolside for a few days drinking far too many Mexican Chardonnays, this Scallywag’s brain was in danger of atrophying. “We’re going to the ruins in Tulum”, I announce at dinner (I’d started to dream in bubblegum pink). Within moments Fiesta Barbie appears from a nearby table. All tits and lips she stops to chat and her trip to Tulum becomes topic. Tidbits include machine-gun wielding Mexican policia, headless Mexican forces found the day before, and high-tailing it back to the states on her husband’s jet in, oh, about an hour. And then she reveals she’s just met her birth parents for the first time in all of her 40 years.

What’s an eye-rolling scallwag to think now? The uncomfortable thing about plastic, the obvious stereotypical kind with the big penis-projecting husbands anyway, is their minds seem to nip tuck their world view into an impenetrable package of perfection. If you happen to be a bit more of a post-modernist, alright trouble maker, unfettered sparkle can be a bit too shiny unless accompanied by some kind of high density irony.

But let’s say for a moment we leave our socially constructed truisms behind. An exploration of the plastic castle might reveal something seemingly a little lovely about a life not tainted by worry and the things that keep us from feeling free. The bill: taken care of. State of the world: not her problem. Gravity: Balloons float.

Is it then envy that inspires the discomfort and sometimes hate? Perhaps this shouldn’t be the case: the drive to plasticize and fit a certain Mattel® mold could be a sign of the most insecure woman of all. Afterall, plastic only runs so deep. And sometimes underneath it, are the women who after 40 years of life, have only just met their mother and father.

And then sometimes not. But still, can we really blame them for seeking the knife when American culture is so grounded in the pursuit of perfection? The fact is, we may have been lured out of the kitchen by Betty Friedan, but our world is still largely run by men. It doesn’t seem improper that a woman would want to do what she can to make herself most desirable so she can compete at her best.

Without chapels from 5 BC or monuments commemorative of great centuries old family legacies, America can only pose itself as the perfect alternative to everything that it’s not. How often don’t we stop to think: we’re only 232 years old. In a room full of elder statesmen, we’re the naive teenager without a plan. From this point of view it’s not so much of a mystery: like an unschooled cowboy at a 5th Avenue Ball, we’ve tried to talk right and pose perfect with ideal houses and cartoon women. But as pefect as we try to be, like the proverbial bull, all we do is break the china.

On a perfectly planted palm-lined drive back to the hotel in a chauffered Chevy Suburban, driver’s choice of pop music humming, Coca Cola signs blinking, it’s easy to start picking on America for other things. But never having seen one of our police men carrying a machine gun, instead the feeling is grateful.

The next day we opt not for Tulum. If there truly are machine-gun wielding policia in the vicinity, this scathing scallywag’s most happy to be surrounded by the insulation of American-made plastic when the clips go off.