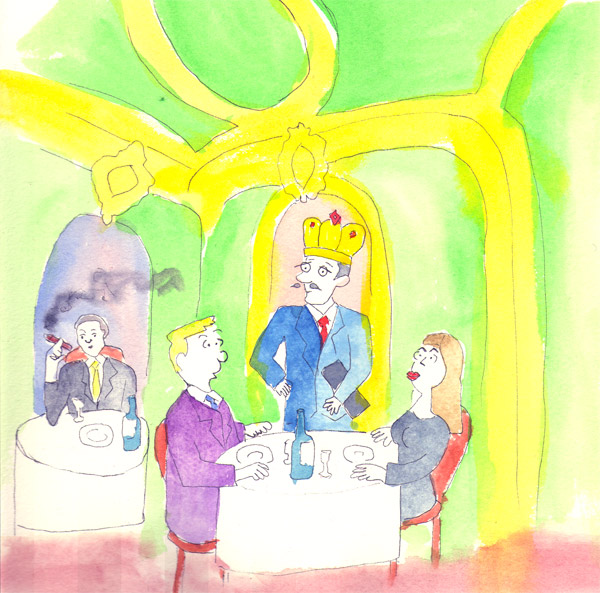 Like all great budding artists, we here at Scallywag and Vagabond like to know everything about the zeitgeist: it makes the rules more fun to break. So who better to explain the institution of dining than Arthur Schwartz, the former Chief Food Columnist for The Daily News. With 30 years of columns, award-winning cookbooks, and the amazing meals that inspired him under his belt, Arthur is a food lover, corporate news conquerer, radio talk show provocateur, cookbook writer, social cynic and scallywag at heart, just like us.

Arthur Schwartz: (Laughing) I wouldn’t consider myself a master of either. I don’t know what a master is. I started out as a writer.. I had no intention of being a food writer. I fell into it. These days you can’t just fall into it– it’s impossible. But back then there was no description of food writer.

AS: You know what? I don’t understand. Why do people leave their house for a hamburger? It’s the easiest thing to cook well.. and cheap. In fact we’re having hamburgers for dinner tonight. I can cook two huge hamburgers with my eyes shut. The cole slaw and potato salad they’re always easy to find. But French fries…..well that’s always another story. They’ll either make or break a restaurant. In fact they either make or break one at home too.

SCV: Do you ever just wish you were an accountant?

AS: I have to tell you that some of the most successful restauranteurs have accounting backgrounds. There’s the Cornell Hotel Management school. Take Drew Nierpoint for example. Chefs don’t understand these things.. Unless they open their own restaurant. They think they can put truffles in everything. Maybe the economic crisis will change things. There won’t be $41 hamburgers anymore.

SCV: Just so our readers can finally get it right, what’s the proper etiquette for dining out?

AS: Oh my god, I could go on and on and on. There’s no one sentence or paragraph I can tell you. First of all it depends on where you’re dining. You don’t behave in a $4 hamburger place the same as you do in a $41 one. I don’t think that’s a good question, Lauren. I could do a whole lecture on this! I guess you size up the place when you make a reservation on the phone. You say ‘Hello?’, they say ‘Hello’. You say ‘I’d like a reservation for four’. They say, ‘Hold on while I get a pencil and paper to write that down’… Why are you answering the phone! This is when you know you’re going to have a service problem when you get to the restaurant.

SCV: Why do people brag when they’ve eaten someplace before everyone else?

AS; Because we live in a very shallow culture where going to a restaurant gives people status. A competitive shallow culture that I don’t care about anymore. 41 dollar hamburger. You pay for the rent not the food.

SCV: Is it true that good looking people get better seating?

AS: Yes.. It’s called dressing the room. Buzzy O’Keefe, the owner of the River Café, has this magnificent view of Manhattan, but you literally can not reserve the window and everyone always wondered why. Many years ago I asked him the question on my radio show, it was very informal, and he said, “Well you never what a customer looks like on the phone, and since everyone is looking in that direction, we have to put good-looking people in the window.” Either you’re powerful or pretty. Money counts for everything in New York. It always has.

SCV: What if I was really beautiful but I showed up with no shoes?

AS: Doesn’t matter. You’re beautiful. You have to be young and beautiful. They have dress policies only so they can turn away people who they feel are inappropriately dressed. If you’re beautiful and you show up in jeans they don’t care. But if you’re an ugly woman, they have an excuse not to seat you. I’ve seen that happen.

SCV: What should one refrain from saying at the dining table?

AS: Depends on the company you’re with. Sometimes there’s nothing you need to refrain from saying. It’s safe not to talk about politics and religion, but usually we’re going out with people we know. You have to judge by the people you’re with. Usually one doesn’t talk about blood and guts. On the other hand, you might talk about sex.

SCV: What should one refrain from drinking at the dining table?

SCV: What does it take to get a table at one of the best restaurants on a Saturday night?

AS: Ohh hmm well first of all if you’re nobody, and most of us are, you just have to call long enough ahead to be assured a reservation. But very often, if you call at the very last minute around 7 o’clock… If you wait and pounce on it, you’ll get lucky. Usually restaurants keep aside a couple tables for famous people so they can accommodate them at the last minute. You don’t have to be famous if you make a reservation. The problem is most New Yorkers don’t want to cultivate a relationship with a restaurant. Restaurateurs love regulars and they will do almost anything for you if you are.

SCV: Why do people drink with their pinkies out?

AS: Well you don’t need your pinky to do it. It used to be considered good manners. Whether habit or affectation, I don’t think there’s any purpose to it. It’s like let’s get this out of the way. It gets in the way! Maybe they think it’s good manners or something. It looks silly. But I don’t notice it that much.

SCV: How should one react to someone sitting three feet away from them at a restaurant when they wish they were sitting 3000 feet away?

AS: A stranger who’s being a pain in the ass? Is this person with you and your friends? If they’re with you, you have to be polite and suffer. Just shut up and keep eating. If it’s someone who is your friend you can say something about their behavior. ‘God you’re being impossible tonight’… Just make fun of it. And if it’s someone at another table you don’t know, you can ask to be moved. But there’s not much you can do to change their behavior unless they’re doing something illegal like smoking. And then you tell the manager. And if they manager tells you to fuck yourself then you get the bill and leave. What else you gonna do?

SCV: Why do people keep going to Aureole when it tastes so bad?

AS: I had no idea it tasted bad. I haven’t been there in 10 years. It was good in the beginning when Charlie Palmer was in the kitchen. It has a bad reputation? You know eating at a restaurant is not a movie. It’s not exactly the same every time you have an experience there.

SCV: When you have a cold, do you go on disability?

AS: I’ve worked for myself for the last umpteen years so if I’m sick I’m just playing hooky. I worked for the paper 1969-1996. Did I ever miss a column? I don’t think I ever did.You have a responsibility to produce whether you have a cold or not.

SCV: What should one do if their credit card is declined?

AS: Try another credit card? Hope you have enough cash in your pocket. If you know for certain it should work you ask them to try again. It happens sometimes.

SCV: Tell me the first word that comes to mind with the following:

AS: I know it’s a restaurant.

SCV: Little people. Finally Arthur can you offer us a favorite recipe.

AS: Do I have a good recipe for you. It’s from a restaurant outside Naples, Italy called Il Corti, which means little people in Italian. The restaurant was started by these midget brothers 50 years ago. The recipe is for their pasta dish. It has a little bit of a lot of a lot of things: it’s called garbage pail pasta.

SCV; Thank you Arthur, by the way I have several ATM cards…..