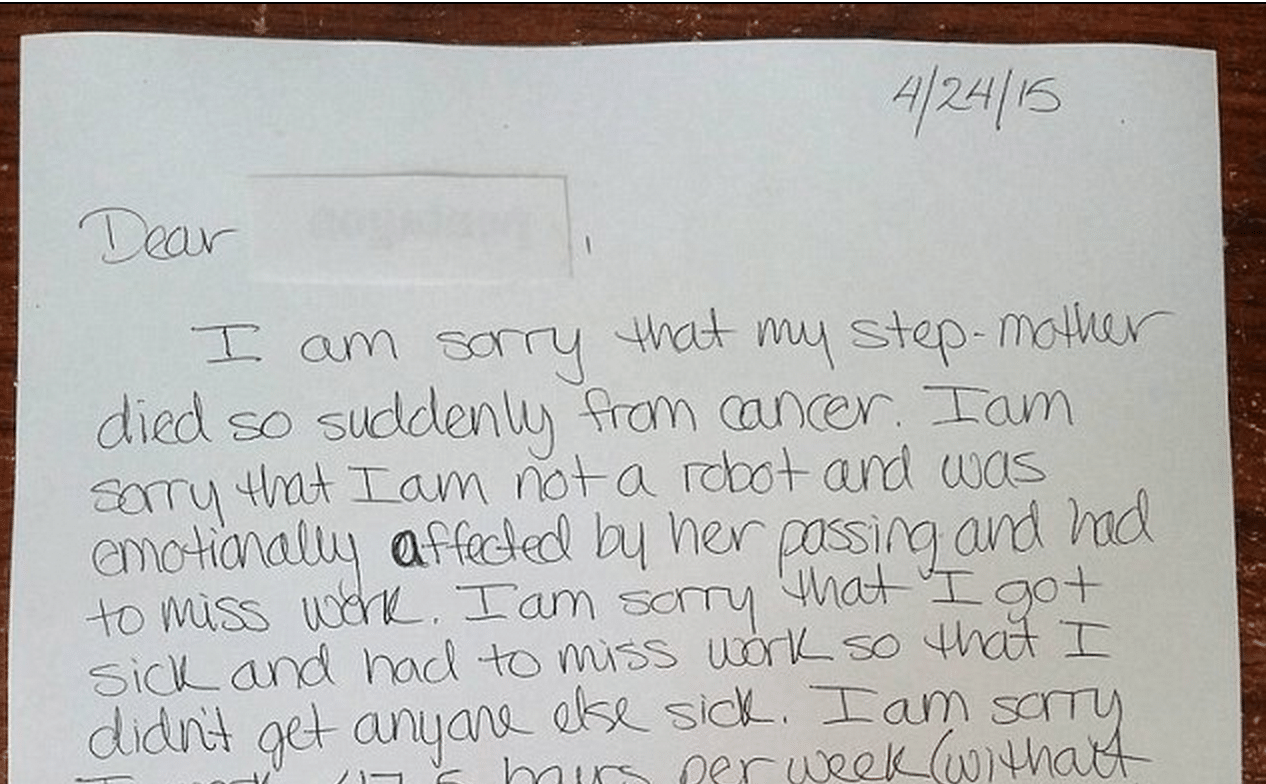 Going viral this afternoon is a ‘sarcastic’ resignation letter courtesy of an unnamed employee and reddit user gahdzuks who in the end had a gut full of the way her/his employer was handling personal turmoil in the employee’s life which caused them to perform less than satisfactory at their place of work.

Believed to be a US employee given the use of their resignation date, 4/24/15 the writer goes on to vent their frustration with their unnamed employer’s company policy and what appears to be their less than sympathetic reaction to a death in the worker’s life which caused them to lose work and presumably not perform up to par.

The letter writer is also careful to make note that they also feels aggrieved for not being paid overtime and their employer’s lack of making adjustment for doctor’s visits and tending to a dying step mother to cancer.

‘I am sorry that my step-mother died so suddenly from cancer. I am sorry that I am not a robot and was emotionally affected by her passing and had to miss work.

‘I am sorry that I got sick and had to miss work so that I didn’t get anyone else sick.

‘I am sorry I work 47.5 hours per week (without getting paid the overtime that I am legally owed) for the last 7 months, and thus have little choice but to schedule necessary doctor’s appointments during school hours.’

‘Clearly I am a terrible employee, and for that I apologize. I know you hate people telling you how to do your job, but I suggest you start looking for my replacement. Immediately.’

Which is to suggest that the unnamed employee was set on leaving forthwith as opposed to the recommended two week notice.

And then there were these comments on the web which made this author wonder about the state of employer/employee dynamics in the US which one could argue is less than conciliatory and accommodating than in other places in the world. Which begs the question, was the employer within their rights to demand what they demanded of the employee or tone death (purposefully) to the real life dilemmas that workers so often face and with the so often unwilling bosses who just don’t care? Or should the employee just put up with their lot and not burned their bridges?

I know this might feel great to stick it to them, but I hope you have other references for a new job

As good as this felt to write and send, they will most likely look at this and go “Wow, fuck this asshole they were a terrible employee”

This letter really is pathetic. If you are disgruntled and quitting have some guts to say this to their face. You accomplished nothing here.

You seem like a terrible employee and you should feel sorry. You also seem to be aware of all this, good luck on your next venture!

Also why would you hang around for 7 fucking months if they weren’t paying you overtime?