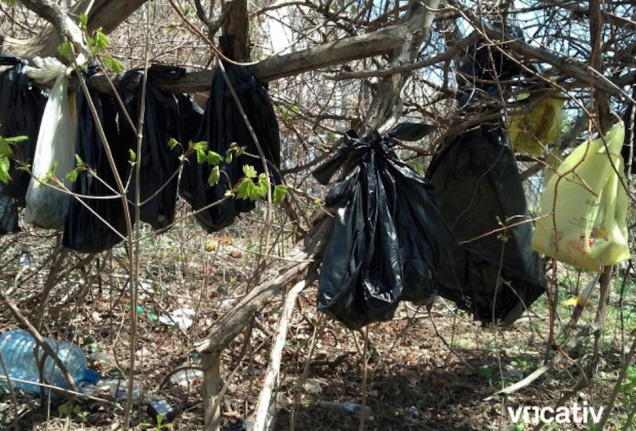 Police are trying to come up with possible explanations after coming across more than 30 dead cats hanging from a tree in an abandoned lot in Yonkers, New York. The cats, most of which were stuffed in plastic bags, were arranged ritualistically throughout the tree, according to Vocativ.

Told Ernie Lungaro, director of humane law enforcement of the SPCA: ‘They were placed in small shopping bags, the plastic bags that you might get from an A&P or a ShopRite, and then they were hung from a tree,’

‘Some were severely decomposed. We got a couple that were still fresh, within the last few weeks maybe. But we’re transporting them and are going to have some necropsies done. We’ll know more then.’

Employees from the Department of Public Works came upon the horrific scene after turning up to work on the abandoned lot, which is just 10 minutes from the Yonkers Amtrak stop and close to several shops and restaurants. Authorities haven’t figured out why the strong odor didn’t attract attention earlier. In case of course it did…

‘There’s a path that runs down to the businesses. Clearly, people have walked that path pretty often. It’s hard to believe that someone didn’t notice something. The smell of decomposition is overwhelming.’

Interestingly there have been similar reports of a large number of dead cats having been found in Yonkers—-last year, 22 cats were poisoned in the area— Laukhuf cautioned it’s too early to tell if the cases are related. You think?

‘We’ve never really seen anything like this,‘ she said. ‘What’s so disturbing is the way the cats were hung in bags and arranged. This is obviously the work of someone very deranged.’

Deranged or culpable of going to the dark side without a shred of empathy, which comes under the definition of sociopath. Or unless authorities are dealing with a religious cult that has made cats token symbols of who knows what?