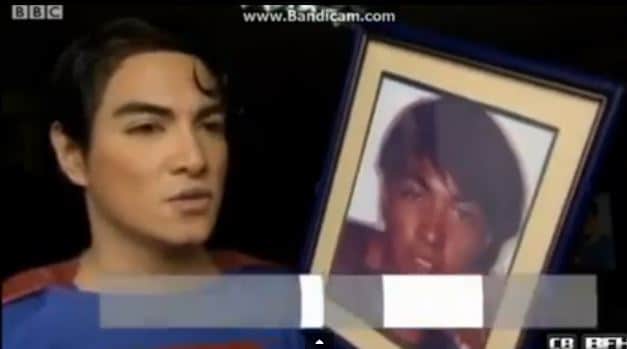 It seems die hard Superman fan Herbert Chavez has gone all out to mimic the appearance of his life long hero Superman with a regalia of plastic surgery operations that would make any perfectionist wince.

At 35 years of age, Herbert Chavez who hails from Calamba City, Philippines has gone on over the course of 16 years to have 19 surgeries, all so he can closely resemble his comic book hero, Superman.

Having spent close to $7000 on mimicking Superman (a fortune considering that the average annual earnings in the Philippines approximates $700) some have gone on to wonder about the audacity of Herbert Chavez.

Dressing in his trademark outfit, Herbert Chavez gleefully romps around the streets, showing off not only his uniform but a myriad of surgical procedures that have him looking very much like his hero, including various nose jobs, lip liposuction, jaw realignment, pec implants, abdominal implants as well skin whitening.

Said to have first fallen in love with his idol at age 5, Herbert Chavez volunteers that he aims to teach kids good morals while also brightening their days.

Reflected Herbert Chavez: ‘I feel like a Superhero whenever I pull on the costume, but my mission is not to save the world but to help in my own small way and bring a smile to the faces of local children.

‘I don’t have any regrets at all. People come up to me in the street all the time and want their picture taken with me.

‘They are all really excited to see a real-life Superman in the Philippines.’

Interestingly Herbert Chavez goes on to reflect on the idea of perfection (or should one wonder timeless invincibility?) where he muses the following:

‘If you talk about super heroes, the expectation of people is that they are flawless, they do not get hurt, they do not die.

‘But as human beings, we can only copy their looks. Especially as a Filipino, I have very Asian features and did not look like the caucasian Superman.

‘So when I was able to save enough money to alter my features, I chose to copy those of Superman.

‘It is hard living up to people’s expectations as a living superhero. That is the reason I have had so many surgeries because I undergo maintenance procedures that need performing.

‘For example, my cleft chin is formed of hydrogel, but it does not always appear balanced. The more dehydrated you get the smaller it gets, so you have to keep adding to it.

‘I am such a good customer of my surgeon, Tito Garcia, he does all the work for free as part of a part-exchange deal.

‘I help publicise his practice in return.’

In keeping with his desire for perfection and presenting an idealized vision of himself, Herbert Chavez now plans on further operations where he hopes to make himself taller and further surgery to shore up his abs and bottom.

That said, Chavez is aware that there may be a limit as to how far he can continue going under the knife, not that he necessarily has any regrets at present.

‘I totally don’t have any regrets. What is there for me to regret? Everything that has happened in my life has been positive and because of Superman.

‘When my body says it can not endure it anymore or when my doctor says that my body can not handle it because of age, then I will stop.’
To date, Chavez has managed to appear in national billboards as well as having gone on to make his own Superman outfits from scratch, has become a kind of national icon himself.

This past June Guinness went on to recognise Hector Chavez for having the largest collection of Superman memorabilia with 1,253 items – ranging from life-size dolls, to posters and rings worth thousands of dollars. A figure Chavez contests is actually more closer to 5000 items and one day hopes to accelerate to 10 000 items.

‘I remember when he was a kid, he was already fond of Superman figures. He would be very happy when I bought him shirts with Superman pictures on them.

‘At school they held drawing competitions, and he would always draw Superman pictures.

Which posits the question, can one morph into looking like a hero and thus become one or can one sometimes simply choose to act like a real hero and become one in actual life without having to resort to a slathering of numbing body alterations…?