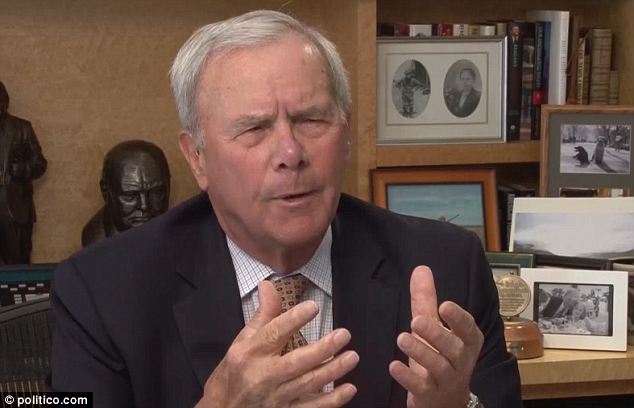 The grand poobah of media, NBC‘s Tom Brokaw has gone on this weekend to say that he is boycotting the upcoming White House Correspondent’s dinner tonight. Why? Because it has become too much of a Hollywood spectacle. Case in point, Tom Brokaw’s disgust that media whore Lindsay Lohan (I know poor Lilo) has now been invited as a guest on behalf of FOX to attend the dinner.

Traditionally the dinner has been seen as an annual congregation amongst Washington’s political elite and that of the media’s most savviest reporters but that Tom Brokaw argues is a thing of the past as in his opinion the get together has ostensibly become a pony show now that figures from Hollywood are being invited to come along.

Told Tom Brokaw to politico: ‘The breaking point for me was Lindsay Lohan. She became a big star at the White House Correspondents’ Dinner. Give me a break.’

Brokaw goes on to say the optics of the evening are particularly jarring, especially when public opinion of both politicians and journalists is low, and that now there is in his opinion too much ‘sophomoric humor, a lot of people drinking way too much’.

Adds Tom Brokaw: ‘It has become more of a tabloid kind of dinner.’

‘What a collection of people! Here in one room we have members of the media, politicians, corporate executives, advertisers, lobbyists and celebrities: everything that is wrong with America is here in this room tonight.’

The UK’s dailymail even goes on to note at last year’s gathering notable guests at the NY Post’s page 6 dinner included Kim and Kris Jenner, Kate Hudson, Reese Witherspoon, the casts of both Glee and Modern Family.

Hardly the most distinguished political elite, but perhaps Washington knows that it has to court these players and not just the media as they too have become widely followed in their own right and in a way impart their own influence in culture. For better or worse.

Then there were these reflections on the web that caught my eye as well:

Brokaw’s only criticism of the WH correspondents is their stupid dinner? How about the softball questions tailored to allow BHO to speak 15 mins without a follow-up? How about ignoring important stories like Benghazi? Child Please!

He RESENTS Lohan, but is OK with Formerly Free Press cozying up to the Corruptocrats, as they dismantle America and Our CONSTITUTION, bit by precious and painful bit?

You HAVE no CREDIBILITY…