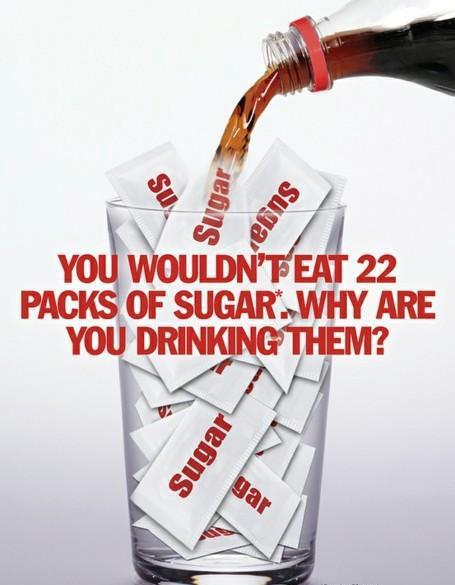 So do you really need the Mayor coaxing you to be healthy?

Mayor Bloomberg has a message for New Yorkers; stop drinking all that sweet sugary stuff that makes you all fat and raises the city’s health care costs now!

In an initiative first proposed by Mayor Bloomberg to curtail the sale of large sugary and soda drinks at restaurants, street carts and movie theaters NYC today has overwhelmingly gone ahead and approved the ban of such drinks greater than 16 ounces.

“NYC’s new sugary drink policy is the single biggest step any gov’t has taken to curb obesity,” he wrote. “It will help save lives.”

The measure is now expected to become law within 6 months but the American soft drink industry is none too pleased with the ruling and has promised to fight the measure (yes getting rich off your bad habits is the name of the game of the food industry kids).

“This is not the end,” Eliot Hoff, a spokesman for New Yorkers for Beverage Choices, an industry-financed group opposed to the soda-sales restrictions, said in an e-mail moments after the vote. “We are exploring legal options, and all other avenues available to us.”

And how would the new rule work? The nyt‘s explains:

The soda measure would bar the sale of sweetened drinks in containers larger than 16 ounces, smaller than the size of a common soda bottle. It would affect a range of popular sweetened beverages, including energy drinks, presweetened iced teas and common brands of nondiet soda.

The restrictions would not affect fruit juices, dairy-based drinks like milkshakes, or alcoholic beverages; no-calorie diet sodas would not be affected, but establishments with self-service drink fountains, like many fast-food restaurants, would not be allowed to stock cups larger than 16 ounces.

Only establishments that receive inspection grades from the health department would have to obey the rules, a group that includes movie theaters and stadium concession stands. Convenience stores, including 7-Eleven and its king-size “Big Gulp” drinks, would be exempt, along with vending machines and some newsstands.

Yet as pundits have offered in the past which even Mayor Bloomberg acknowledges there are some limitations with the efficacy of the new ban, principally being that customers can buy as many 16 ounce drinks as they like (which might sound like a way to get around the limitation but imagine the chagrined look on bystanders as one attempts to load up on 4, 16 ounce bottles, something that the soft drink industry is all too cognizant of)- which theoretically mitigates the plan but makes it of course socially implausible to stock up on a whole batch at the same time.

And then there were these following comments which caught my eye as well:

You guys really need to read the policy itself. The ban is very limited. I can still go buy those very large drinks just not at the movie theaters or concession stands or establishments that are graded by the city. The fact of the matter is that this policy aims to force consumers to realize the sad fact that gulping large amount of sugary drinks does contribute to the likelihood of becoming obese. You can still buy a 2-liter soda or a barrel if you may. But when you go to movie theaters where most people are highly likely to consume a lot of soda, your size will be limited to just 16 oz. And in theory, the consumers might realize why they just can’t buy those humongous sizes anymore. More thinking, more debate, less sugary drinks consumption.

Be careful of cherry picking what you allow the gov to regulate. I know many liberals who are for this as they are skinny and not tolerant of obesity. On the other hand they want the gov out of their lives. People of the great US be careful of agreeing with limitations because you don’t use the things being limited next your time will come. Imagine next a bar tender can only serve each person two drinks because more than two drinks is bad for you. As someone said below this is the start.

While it is true that drinking large amounts of soda is bad for you, that is your decision to make. If the government wants people to eat and drink healthier, educate them on the health risks, don’t ban unhealthy items. While you would be wiser not to drink that much soda, the point of this country is that you have freedom, and it should not be up to the government to decide “what’s best for you”.

The cup size is not the problem its the quantity and regularity of consumption coupled with a sedentary lifestyle, but having any government entity local, state or federal legislate what size cup you can consume your beverage of choice in, or most anything else related to personal behavior, is patently un-American, especially when its a rule as poorly concieved as this; it regulates sodas but not frappacinos, the latter having far more calories even in smaller sizes. This is a prime example of the ineffectiveness, ineptitude. and incompetence of nanny-state beauraucracies.