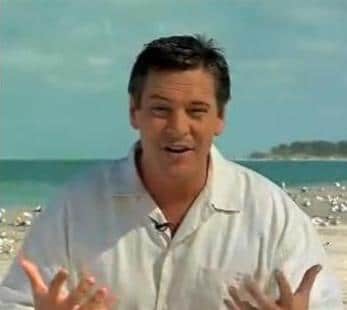 Don Lapre, who’s claim to fame was selling “tiny classified ads” in newspapers and making $50,000 from his one bedroom apartment, was indicted by a federal grand jury earlier this month with 41 counts of conspiracy, mail fraud, wire fraud, and money laundering.  He failed to show up for his arraignment in court on Wednesday, June 22, and US Marshalls arrested him on Thursday, but not before they made an emergency detour to the hospital.

Phoenix New Times: “ when federal agents stopped the car Lapre was in, near Warner Road and Interstate 10 in Tempe, they found the marketing guru suffering from deep, self-inflicted knife wounds to his thigh and groin.

The U.S. Marshals Service believes the vitamin peddler had been trying to hit his femoral artery in order to bleed out and commit suicide. The ultimate method of eluding capture.”

Desperate times, desperate measures, but what’s stranger is the setting where authorities suspect Lapre of stabbing his thigh and groin.

“We discovered that he’d been kind of hold up at the Lifetime Fitness center [in Tempe],” U.S. Marshal for Arizona David Gonzales explained. “He had spent a day and a half secured in a private changing area.”

Gonzales’ men think the 47-year-old Lapre hurt himself while in the massive, posh, 24-hour gym, which includes swimming pools, a cafe, a salon, steam rooms, and a family changing area that has shower stalls with doors.

It was, apparently, in this family changing room that Lapre was hiding, although he did leave periodically to eat at a local restaurant, and buy a knife.

If any of you watched the latest season of Dexter, this story might sound eerily familiar: self-help guru spending all his time in a gym, hiding from the police…  Life imitates art, or the other way around?  Who knows, maybe a vigilante is responsible for Lapre’s wounds.

Lapre’s Website features a message to supporters acknowledging his legal problems. Though it does not mention suicide, it does have a slight feeling of finality to it.

“It did not work out for me with my vitamins but I believe that being willing to fail is part of having a chance at success, ” he writes. “Never stop dreaming and for all those who sent me testimonials of what you did because of some of my help, I am grateful I made a small difference in your life.”

Say what you will of Don Lapre, but no one can claim he is a pessimist. Or can they…?