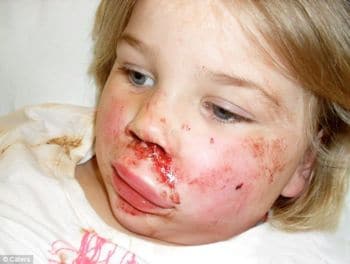 Something isn’t adding up in one British town of Grimsby, if the name of the town should ironically shed some clues of less than stellar behavior…

dailymail.co.uk: This picture shows the horrific injuries Jersey-Lou Perry suffered after thugs threw a brick at her head.

The four-year-old was left with a swollen, bloodied face and broken nose in the disgusting attack in Grimsby.

She was left unconscious with shards of glass in her face after a gang of up to 15 yobs attacked her father’s van – simply because he asked them to stop kicking a ball at the vehicle.

As he began to drive off one thug jumped out from behind a wall and threw a brick through the window, which struck his daughter in the face.

The brick hit her so hard it knocked out her two front teeth and broke her nose.

Her devastated father Kyle Perry, 23, said: ‘I can not believe that someone could do this to a child – who throws a house brick at an innocent little girl?

‘A group of about 12 to 15 of them started to walk towards me. I got back in the van and was going to drive away.

‘I started driving off and a guy who had been hiding behind a wall jumped out and threw something.

‘I heard glass smashing and looked over to see if everyone was all right.

‘That’s when I saw Jersey-Lou had been hit. She was out cold and there was blood everywhere.’

Should we wonder for a moment that the effect of a pack gang elicited primal reactions that perhaps would never have come to pass or was the pack just a convenient shield for one maladjusted individual?

Police have described the male who threw the brick as between 16 and 19 years old, about 5ft 6in and of a stocky build with dark hair.

A Humberside Police spokesman said: ‘We are appealing for anyone with information to come and talk to us anonymously. This is a particularly nasty incident and we would obviously welcome public assistance.’

To date the culprit hasn’t been apprehended, but were hoping it’s only a matter of time.