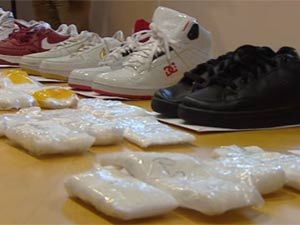 tvnz.co.nz: Ten alleged drug couriers have appeared in court after crystal methamphetamine worth up to $10 million was found in their shoes at Auckland Airport.

The group, all from the same Malaysian tour party, were caught by Customs officers yesterday around midday in what has been described as the largest number of drug couriers ever caught in a single incident in New Zealand.

Each was allegedly concealing between 800 grams and 1kg of the drug vacuum-packed in their shoes as they arrived on a flight from Malaysia, Customs said.

Kids, I don’t know about you but I have to admit that’s one heck of an ingenious plan of getting the good shit into the country. Of course it can it also turn out to be a disingenuous plan the moment you have one misplaced tour member acting funny and getting the authorities to do some quick math in their heads…

Customs Drug Investigations Manager Mark Day said there were signs the group were not in the country for legitimate purposes.

“They had things like itineraries that were in English but (they) couldn’t speak English… those are the sorts of things that stand out like beacons to us,” he said.

Customs said concealing drugs in shoes is not uncommon, but to net 10 smugglers in one day makes this a landmark case.

Which is to say the plan nearly worked aside from the really conspicuous stuff that made it too odd. But then again, if you were a native English speaker would you still be doing this or was this a situation of desperately poor Malayans taking on risk to get some prize cash?

The Minister of Customs Maurice Williamson also said it was a landmark interception.

“I’m very proud of the effort made by well trained officers at the border in stopping this much of such a vile drug getting into the community here,” he said.

“Our diligent Customs officers have again proved, if you bring drugs into our country, you will get caught.”

Day said a similar attempt had been made last year by a Taiwanese tour group “but they too were caught out by vigilant Customs officers”.

So next time your sitting in your room totally off your face, bear in mind all the risks that smugglers are going through to make sure you get the goodies. But then again, intuition should be telling you that if you’re managing to get the good stuff then smugglers are managing most of the time to outsmart customs- never mind the ballyhooing of Customs Minister Maurice Williamson who’d be hard pressed to admit otherwise.