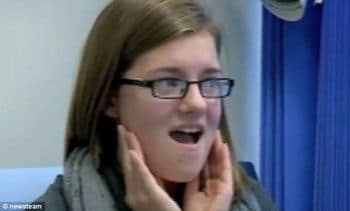 Life has taken a drastic downturn for student Holly Thomson…

dailymailco.uk: A student was taken to hospital after she yawned so hard during a lecture that her mouth got stuck in a wide open position.

Holly Thomson,17, from Kingsthorpe, Northampton, was in a Government and Politics lecture at Northampton School for Girls when she expressed her level of interest by yawning widely.

However, to her horror she opened her mouth so wide she dislocated her jaw, and was unable to close it again.

Kids, I don’t know about you- but I spent my whole time during school yawning and cracking my knuckles in agitation. It hardly seems fair, that Holly who also got to express her despair should be left in such an uncompromising position.

She attracted the attention of a friend who tried in vain to close her mouth before the teacher noticed, but only caused more pain.

Holly said: ‘I was so shocked, my expression probably said it all.

‘I nudged my friend to show her what had happened but I was so embarrassed.

‘When we realised we couldn’t close it, she had to tell the teacher. Everyone burst out laughing, it was awful.’

Oh the heathen, to laugh at poor Holly’s misfortune. What was she expected to do? Just sit there and tolerate the lesson? A student should be able to find some sort of way to facilitate their dismay.

And just how did Holly eventually come to be relieved of her inconvenient imposition?

After teachers were alerted, Holly was taken to the school nurse who tried everything from a hot water bottle under the chin to ice packs to try to free it.

When it showed no sign of improvement, she was taken to Northampton General Hospital where her jaw was eventually freed by forcing 26 wooden splints in her mouth.

Hmm, 26 splints? That will teach Holly for being insolent, right teachers?

The unusual method, performed by Dr Ejiro Obakponovwe, worked and opened the jaw enough to unlock it.

Miss Thomson said: ‘It was really bad at the hospital. I had to sit in the waiting room with a scarf over my mouth so nobody could see what had happened.

One day deep in the future at some future class, Holly will wearily look at the clock, frown deeply and think to yawn when she will turn to her school case and shove a few splints into the corner of her mouth. If only school was a little more exciting…