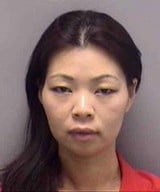 Ting Ting Perng is no longer in love with her man.

Have you ever felt like you could just kill your loved one? Ting Ting Perng certainly felt that this past Monday down in Florida. The mishap is described in detail below.

theweeklyvice; South Fort Myers, Florida (The Weekly Vice) – Ting Ting Perng, a 36-year-old Florida woman was jailed Monday after she allegedly doused her boyfriend with cough syrup and then tried to set him and the Christmas tree on fire.

According to the Lee County Sheriff’s Office, deputies were called to the couple’s apartment after an argument between the two turned violent.

Just your run of the mill domestic pow wow that the sherrif’s intended to resolve peacefully. Well sort of…

Investigators say that during an argument, Perng doused her boyfriend with water and Nyquil before attempting to set the bed on fire.

The boyfriend told deputies Perng then ran downstairs, grabbed a knife and began muttering something about setting the Christmas tree on fire.

Sounds like Xmas to us: Dashing through the snow In a one horse open sleigh O’er the fields we go Laughing all the way

After calling 911, the boyfriend tried to exit the home, however when he saw Perng with the knife, he fled back upstairs..

Deputies arrived to find the boyfriend drenched with cough medicine and large scratches across his chest. The bed was reportedly soaked with cough syrup and had several burn marks.

Perng claimed that her boyfriend had choked her, but she reportedly had no marks on her body. Instead, she appeared intoxicated and extremely angry, according to the arrest affidavit.

(chorus one more time)Jingle bells, jingle bells Jingle all the way Oh, what fun it is to ride In a one horse open sleigh

When asked about the burn marks on the bed, Perng stated that “she did not try to burn the bed. She would rather set him on fire” instead.

One day in the future when Ting Ting Pern goes looking to buy her boyfriend a Christmas present she will suddenly come across a large flask of cough syrup and out of no where fond memories of the good times will begin to flood out of her.