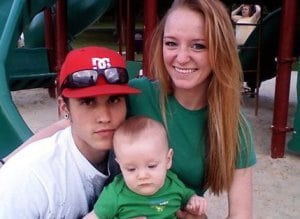 Don’t you wish you were an unemployed pregnant teen flipping burgers?

How times have changed. It was once understood if you were a disenfranchised youth you were often relegated to copious misery and the stain of hamburger juice on your jeans. Not anymore…

The stars of MTV’s reality series ‘Teen Mom’ may complain they are broke, but Life & Style reports they earn big bucks. Not nearly as much as ‘The Hills’ stars made, but certainly more than their high school classmates earn flipping burgers.

“The Teen Mom stars earn $60,000 to $65,000 per season,” a series insider tells Life & Style. It’s enough to provide on-again, off-again couple Amber Portwood and Gary Shirley with comfortable lives–but neither one seems to be a good saver. “Gary says he’s broke,” Gary’s best friend, Jordan Sanchez, tells Life & Style. “The money is the only reason he’s willing to do the show. You can’t walk away from money like that.”

Yes it’s true kids, you can’t walk away from money like that but you can certainly walk away from shows like that. After all what’s the point of watching a show about a 15 year old trying to find 43 cents for the bus fare to make it to a job interview with Burger King when in reality the producers are paying her more big bucks than most adults are currently seeing given our prolonged recession?

Which boils down to the fact that these reality shows are an agitated attack on our sensibilities when everything we are watching is a staged hoopla show more divorced from the reality they are portending to reflect when the reality is it’s inverted fantasy at our collective expense.

But then again why watch TV in the first place if not for the fantasy escape, never mind this time it’s on your dime…