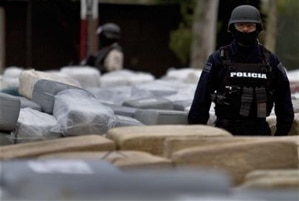 How the tears will flow in the United States.

Looks like there will be tears flowing in the US pursuant to one of the largest drug busts to be made on the border of the US and Mexico in the Mexican town of Tijuana.

BBC: Mexican security forces in the city of Tijuana, on the border with the US, have seized 105 tons of marijuana – the largest such drug haul for many years. (which kids is equivalent to 95 million joints just to put in perspective for you)

Eleven people were arrested during the operation, during which one police officer and one suspect were injured in exchanges of gunfire.

The drugs were found wrapped in 10,000 packages, in houses and vehicles.

They have a US street value of more than $340m, the Mexican military said.

“The seizure of these drugs is without precedent in the country,” General Alfonso Duarte told reporters.

Which begs the question how much of a dent will this have in the US or can one assume despite the propensity of the catch to be a negligent blip in the forthcoming spike in price of the good shit?

Gen Duarte said the packages were still being counted and weighed and the amount could increase. The marijuana would be incinerated once all packages had been registered, he added.

The general said local gangs had been preparing to smuggle the drugs into the US, but he did not identify the gangs or say where the marijuana originated.

Didn’t identify the gangs because they are still under investigation or because the General wisely fears for his life.

Some food for thought, courtesy of boston.com:

And then there’s this delicious morsel to snack on:

Upon taking office in December 2006, President Felipe Calderon deployed tens of thousands of troops and federal police to fight drug cartels in their strongholds. An unprecedented 28,000 people have been killed in drug gang violence since.

Shouldn’t you try smoking the good shit in Mexico one day?