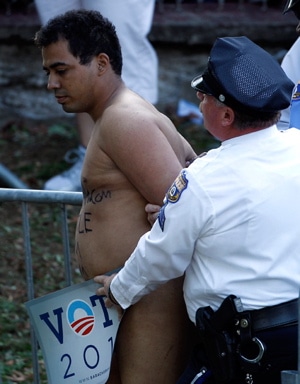 Getting naked can now earn you a million bucks and a rap sheet.

Things got a little hairy yesterday when President Obama headed off to Philadelphia to give one of his famous rallying pitches of how lucky we all are to be American or something like that. Who else was feeling lucky was Juan James Rodriguez. Why? Let’s slip out of our clothes and see if we can keep up with Juan as he runs around the police officers there to keep President’s Obama from witnessing parading grown naked men making a sweet mockery of themselves.

The Weekly Standard: If billionaire Alki David is an honest man, the man who streaked in front of Barack Obama at the president’s rally today in Philadelphia will be paid $1 million for his stunt.

Yes that’s right. You can now earn extra pocket money by adhering to eccentric billionaires schemes. The only requirements it seems are a desire to let it all go, sell your soul torso to the highest bidder and smile enthusiastically as the camera man takes a billion pictures of you for posterity.

As the The Sun reported on August 17: “A WACKY billionaire has offered $1million (£638,700) to the first person who streaks in front of US President Barack Obama. Loaded Alki David has promised to pay out the cash — providing the streaker writes the name of his website ‘Battlecam’ across their chest.”

“When I see the video and it’s confirmed…it won’t be check [that Rodriguez receives], it will be cash,” David, reached by phone tonight, told THE WEEKLY STANDARD.

One day when you too realize that you are a million dollars short of realizing the American dream you too will be tempted to take off your knickers and upload your own video camera. Aren’t you glad that options always exist for you to make quick money?