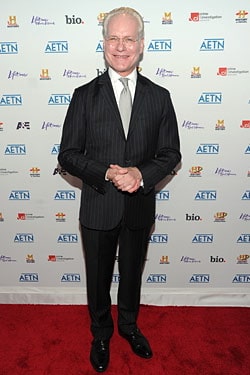 Tim Gunn wants you to know, that he does not tolerate divas, no matter how famous you are.

Gunn is most adored for his sunny, soft disposition, which makes him very likable amongst the typical motley crew of abrasive reality television stars media whores. But now, Tim is taking aim at a few of fashion, lifestyle, and television’s biggest personalities, and telling everyone just what he thinks of their holier than thou ways.

NY Daily News: On calling Mizrahi a spoiled snob in his book, he says, “Oh, please, I was so kind to him. I mean, I wouldn’t have the words to describe some of the more abhorrent behavior. He really is a terrible, terrible, terrible person.”

Please do tell us how you really feel. Terrible, terrible, terrible? That sounds pretty awful. We’re practicality salivating at the thought of the other diva dirt you’ve got to dish, Tim.

The 57 year old Gunn, says that his book blossomed from a simple guide to etiquette, into a guide to good behavior; using your favorite ostentatious celebrity drama queens as an example of exactly how not to act. Tim’s themes include ‘Take the high road,’ you’ll never regret it” and  “Golden Rules” on how to stay cool with “potty-mouthed ruffians.”

We need the potty-mouthed ruffians, Tim, trust me. We really do.