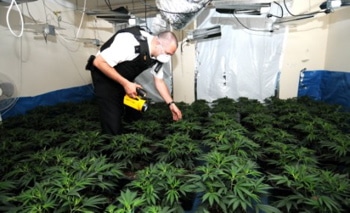 Cannibis exporting out of Britain has now become big business.

Courtesy of the recession a lot of gangs are taking over abandoned cinemas, large warehouses, pubs and even banks to use as manufacturing plants for the one thing that it seems never goes out of business- the consumption of drugs.

Incredibly, a report by chief constables says the gangs are growing so much cannabis that – for the first time – there is enough to start selling the drug overseas.

Which means if the demand for the good stuff is buoyant home it must be even more buoyant in a nascent world market. But there other other things going on as well…

Previously, the UK relied on smuggled supplies of the illegal drug, from countries such as Holland and Morocco, because homegrown crops did not meet demand.

But thanks to British ingenuity and the hustle for an illicit underground economy, the British have gone from being net importers, to net exporters, an impressive feat in the space of a couple of years. But of course this hasn’t come without some very unsavory conditions that have allowed these ‘business men’ to flourish…

The study, by the Association of Chief Police Officers, offers a disturbing insight into how cannabis farms have sprung up across the UK.

They are often run by immigrant gangs from the Far East, though there is evidence they are now joining forces with home-grown criminals.

They are employing children to grow the drug with powerful heat lamps, and also to break into farms run by rival gangs.

The properties are being booby-trapped – with window frames wired to the electricity mains.

Who doesn’t love a factory that is booby trapped? But then again with so much at stake…

Reports of factories being ‘taxed’ by other criminals have led to criminals arming themselves with machetes and sawn-off shotguns.

Mmh, you could probably use a spliff now that you’ve read this right…?