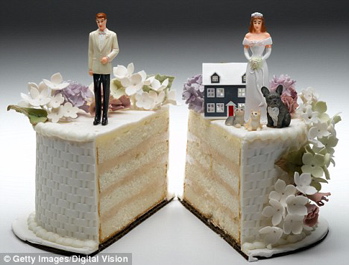 Getting divorced while still living in the same house.

Most people when they decide to get divorce make the decision to get out of their living quarters and move on. But then again Pinchs and Nechama Gold are not most people…

Daily Mail-Co- UK:When most marriages crumble, the house is usually sold and the couple go their separate ways.

But when Pinchs and Nechama Gold both refused to leave in their bitter divorce battle, the courts found a unique way round the impasse.

A judge ruled the Orthodox Jewish couple, in their 50s, had to build a ‘divorce wall’ down the middle of their home to formally separate themselves.

Divorce wall? I just spent thirteen minutes looking through the Oxford dictionary and it seems such a word fails to exist, but then again Pinchs and Nechama are very special people who are intent on leaving their mark on society. That said, should we spend some time thinking where the ‘divorce wall,’ should go? But before we do, first we need to know the following….

They have two weeks to agree where it should go, or the court will decide for them.

How they will split up essential features such as the stairs, the toilet, the bathroom and other amenities such as their kitchen have yet to be determined.

What is also not clear is what kind of form the wall will take – Judge Eric Prus did not stipulate whether bricks and mortar or a sturdy piece of thick cardboard would suffice to carve up the huge Victorian property in the Williamsburg area of New York, which has a large Orthodox Jewish community.

Personally, if me and the missus where building a ‘divorce wall’ in our little dwelling we’d definitely wouldn’t want to use cardboard, unless perhaps it was heavily reinforced with Styrofoam and with a barbed wire to boot. As for where the wall should go, I would at least insist that she get to have the bathroom on her side of the wall (I could always go take a discreet leak on the street curb…), the fridge on my side (the thought of not drinking my beer cold kills me) and a fortified trench running through our bedroom.

The couple married 21 years ago, but after years of marital strife Mrs Gold, who says her husband verbally abuses her and their five children, wants him out. He refuses.

She also claims he blows out the candles she lights for Shabbat, the day of rest in Judaism.

Mr Gold claims his wife hides his medications and has banned him from the bedroom, forcing him to sleep in the dining room.

On May 18, her lawyer asked the court for temporary exclusive occupancy and they have been rowing about the house ever since.

‘They’ve been living like there was a wall up for two years now,’ said Abe Konstam, an attorney for Mr Gold.

‘This just helps them completely avoid each other.’

Judging from the Gold’s case I think a heavy container of lace and mustard gas might also be a good idea to carry, one on each side of the wall.