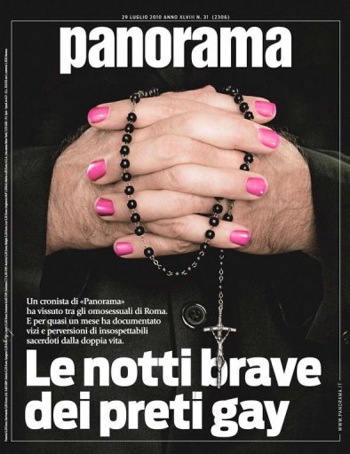 The Vatican demands that all gay priests leave the church.

Things just keep going from bad to worse for the Vatican. In the latest outbreak of scandal, a paper owned by Italy’s prime minister Silvio Berlusconi- ‘Panaroma,’ features an expose of gay priests cavorting in gay Roman nightclubs. To say that the Vatican is deeply troubled and humiliated is an understatement.

Associated press “Those who live a ‘double life’, who do not understand what it is to be a Catholic priest, should not become priests,” the diocese said in a statement after the Panorama weekly’s expose hit the newsstands.

It was “saddened and troubled” by the story, it said.

The expose titled “Gay Priests’ Nights on the Town” offers details on their “vices and perversions” obtained over a month of undercover reporting with hidden cameras.

The Rome diocese pledged to pursue “with rigour any behaviour that is unworthy of the priestly life”. It added: “No one obliges them to remain priests and keep enjoying the advantages.

“Consistency demands that they reveal themselves. We don’t wish them any harm, but we cannot accept that the honour of all the others is dragged through the mud because of their behaviour.”

Could this be a sign of the times? Priests, bankers, politicians, socialites, celebrities all living a collective double life despite the purported affirmations to their fans, believers and brethren? Or could it be that we are finally dealing with human nature, no matter what binaries we place on it the allure of what society calls depravity makes its way. Either way it has certainly caused a lot of distress and once again brings to question the validity of the Church and its own double standards never mind those it  seeks to purge.

The video below will have you gently gasping, we assure you.