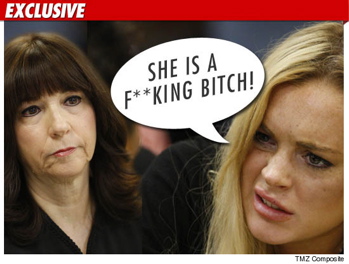 Love and war in a Californian courtroom.

The Lilo ‘can you believe I am having the time of my life adventure’ continues this morning with revelations that upon her sentencing- Lilo got on her twitter and started blasting that Judge Revel is a ‘f**king b*tch!’ Mmh….does this sound like the grovelling little girl who 3 minutes earlier was on her knees promising sweet nothingness for Judge Revel’s forgiveness?

TMZ: Hours after the sentence — Lindsay bitterly complained to her friends, Revel hates her, was out to get her, and thinks all the judge wanted to do was make an example out of her.  Calling Revel a “f**king bitch” does not exactly square with Lindsay’s final words in court Tuesday, “I don’t want you to think that I don’t respect you.”

Lindsay insisted she does not have a problem with drugs or alcohol.

As for whether the judge gave Lindsay a 90-day sentence to make an example out of her … some  defense lawyers who practice at the Bev Hills courthouse believe Judge Revel’s sentence was out of whack.  Several of the lawyers who have had similar cases before Judge Revel say none of their clients have gotten more than 30 days in jail, for similar probation violations.  One source said, “No one gets 90 days for this.  No one.”

No one gets 90 days jail for this? Ironic. No one gets 100 000 news media stations to dissect a spoilt 24 year old girls life either. In some parts of the world Lilo would be getting stoned for her indiscretions. How ironic that Lilo would claim that Judge Revel is trying to make an example of her when in fact Lilo has been doing and continues to do her best to make an example of her. I look forward to reading Lilo’s ‘While I was behind bars,’ memoir and Judge Revel’s ‘While I secretly cried when Lilo was behind bars’ memo.