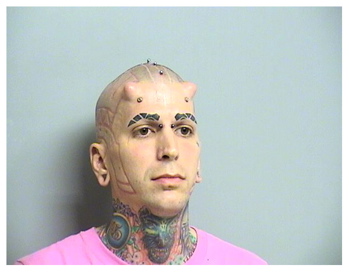 Don’t touch my horns or I’ll stab you with them!

Have you met Jesse Thornhill yet? No, well Jesse would like to introduce himself to you, but not first without telling you the recent errors of his ways. Errors? What errors could Jesse possibly have? Let’s all find out…

The Smoking Gun: The Tulsa man was arrested early today after he allegedly tried to run down his landlord with a car. Following his arrest for assault with a dangerous weapon, Thornhill, 28, was booked into the Tulsa County jail, where the below booking photo was snapped. Yes, Thornhill has horns. The jarring cosmetic, um, improvement is noted thusly in the “personal oddities” section of a Tulsa Police Department report: “Horns, neck tattoos, implant earrings on head.” According to cops, the landlord was in the street when Thornhill “attempted to strike her with his vehicle but missed” due to her “jumping out of the vehicle’s path.” Thornhill was released this morning after posting $10,000 bond in connection with the felony rap.

Yowza, does Jesse send goose pimples down your spine and really is he the type of guy some of you girls would bring back to mom just to spite her? Or are you the type of person that would trick Jesse into coming back home for a glass of milk before pelting him to death because you thought he was the white devil?

But prey, why was Jesse trying to run down his landlord? Was she upsetting him by giving him weird looks every time he dropped by her to pay his rent, did he refuse to share a cup of sugar with one of the neighbors or was Jesse accidentally confused for the devil incarnate when Jesse’s land lady decided it was probably now or never to go pick up the rent check.

Jesse. Would you spent a quiet afternoon with Jesse? And really what would you speak to him about besides annoying land ladies?