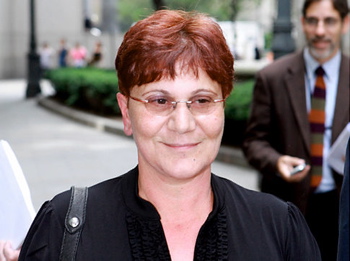 Meet Antoinette Hodgson, this week’s Jackass of the week. The 46 year old mother of three from New Jersey is about  to be crowned “Ponzi Queen”. She milked investor’s money-prostate for over  $45 million dollars and blew $6 million of it on numerous outlandish things.

Between 2006-2009, Hodgson’s real estate business brought in millions from investors throughout New York and New Jersey. U.S Attorney Preet Bharara said, “What Antoinette Hodgson allegedly promised to investors seemed too good to be true and that’s because it was. She promised high rates of return on funds to buy and renovate residential properties that would be resold or rented” (Come on, you can’t have your cake and eat it too people).

I am sure you are all wondering though, what did this sneaky conniving bitch spend nearly $6 million on?… Not only did she pay off early investors with funds received from later participants, but how bout she invested $700,000 in an Arizona Dunkin’  Donuts franchise.  I mean we all love us some D n D but holy shit woman.  She also spent hundreds of thousands of dollars in Atlantic City and Las Vegas, not to mention dishing out tens of thousands more to friends and family.

Hodgson was charged with one count of wire fraud and one count of conspiracy. She was released on $6 million bond and obviously pleaded not guilty ( Go figure, you’re fucked woman). Though her defense attorney, Jack Arsenault said that the feds are blowing this out of proportion, Hodgson could face up to 20 years in prison.

Even if  Mrs.Hodgson helped her family, her greed outweighs it all. People gave her  an inch (or thousands) and she took a mile (millions)…For that Ms. Hodgson I hope you rot for 20 years, that smirk of yours will quickly be slapped off by the long dick of the law.