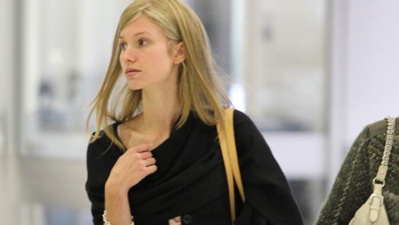 The end of a nightmare.

Charlotte Lindstrom has spent the last 3 years of her life locked away in prison in Sydney because of a crime she committed out of passion. And today newly freed she is finally saying goodbye to the things that she once loved and in the end nearly destroyed her, bound on a jet back to her family who are waiting for her in Singapore before en route to Sweden.

SWEDISH model Charlotte Lindstrom has quit Australia after spending three years in a Sydney jail for soliciting the murder of two witnesses in her boyfriend’s drugs trial.

She was whisked away from a high-protection cell in Sydney’s east, where she had been serving a sentence for a crime she committed out of love for her former boyfriend, Steven Spaliviero – a self-confessed drug manufacturer.

Of course by now we’ve learned that love and good judgement don’t always go hand in hand, but sometimes as incongruous as it may seem you often have the beauties being attracted to the dark horses, maybe because there is something of the opposite in both of them or the fact that despite appearances, the beast can lurk anywhere…

After leaving prison under cover of darkness yesterday, she spent several hours inside a Mosman home, believed to belong to friends connected to the Swedish Embassy.

When she finally arrived at Sydney Airport’s departure terminal in a black hire car shortly after 1.10pm (AEST), there was no prison tracksuit.

Instead, a woman more closely resembling the Charlotte of old emerged, dressed in blue jeans, a pale pink top, a black cardigan, and carrying a Louis Vuitton handbag.

While she appears to have gained some weight since plummeting below 40kg during her jail sentence, Lindstrom still appeared painfully thin.

The 25-year-old kept a low profile, keeping her head bowed and eyes on the ground. When she was handed her boarding pass, she smiled and giggled. A spot of duty-free shopping for makeup was next, then a short wait at the departure gate.

It wasn’t until she was safely aboard the flight that her eyes filled with tears.

Tears one wonders for the man she will unlikely never see again that she sacrificed so much of her life for and tears for the new life waiting for her.