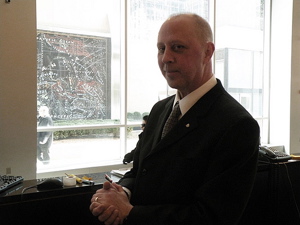 The potential strike that has Park avenue terribly inconvenienced.

It is understood in certain circles that servants do as they are told. That of course may be true in many of the people’s minds who may be potentially inconvenienced if no impasse is found come Wednesday but not to the servants themselves who are fighting for something rich people are loathe to give away- more money. The NY Times clarifies for us:

Residents, co-op boards and building management companies have been busy planning for the sudden complications that could come at 12:01 a.m. Wednesday with the possible departure of the building workers who, among many other things, hold open the city’s doors.

Who will safeguard my apartment as I sleep? Greet my children when they come home from school? Accept deliveries? Clean the hallways? Sort the mail? Operate the elevator? And who, for goodness sake, will let the cleaning lady in?

Yes and who will scoff when you walk in drunk at 4am in the morning, who will have to bribed to keep quiet about the odd comings and goings of certain characters and affairs? Obviously it’s a national issue and people who normally have other people think and act for them will be forced in the longest time into a terrifying predicament- that of having to open their own door. Emergency workers are already being stationed in the event of wide disarray…especially on the Upper East Side where the most traumatic casualties are expected to occur.

The 30,000 residential doormen, porters, superintendents, elevator operators and handymen now earn an average of $40,500 a year, with benefits raising the total to nearly $70,000, according to the Realty Advisory Board, which represents building owners. The workers are seeking wage increases, while building owners are pushing to reduce benefit costs.

“We’re working hard, we’re talking,” Ms. Rothman said. “There’s a lot of good will on both sides and very different feelings about the current economic situation.”

“I don’t think anyone wants a strike,” she added.

But ironically the strike could do a lot of good for people who have never been forced to open a door for themselves in their life, that said our bet is that the board capitulates and gives the union what it needs or otherwise be forced into a nasty existential angst that it would rather not deal with.