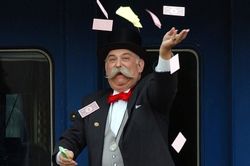 Economics 101 for Americans in need of economic sanity.

Here comes a seemingly interesting quandary. According to a report released by the Wall St Journal, there are more people in America who are worth more than a million dollars than ever more. Great if you are a millionaire, but kind of bad if you are not right? Which you’re probably not.  So let’s have a think about this and see where it all leads us…

The number of U.S. households with a net worth of $1 million or more, not including primary residence, jumped 16% to 7.8 million in 2009 from 6.7 million the year before, according to a report released today by Spectrem Group.

Well could that be because rich people are getting richer off the backs of your labor? Of course not, that would be too much too bear, so we’ll just say they are richer than you and I because they are better looking, more popular and dress well too. After all they’re only certain things you can control and wealth is rarely one of them..sort of.

But hold on, is there more?Yes there is actually…

The millionaire population is still far short of the 9.2 million counted by the Chicago wealth-research firm at the peak in 2007. But the trend shows that the recovery is well underway–at least for the wealthy. “The nation’s millionaires–together with its Ultra High Net Worth households–are bouncing back from the recession,” said George H. Walper Jr., president of Spectrem Group. In addition to the millionaire groups, the broader affluent population, those with a net worth of $500,000 or more, climbed 12% in 2009 to 12.7 million.

So that sort of means although there are increasingly more millionaires, there isn’t an avalanche of them like there were back in 2007, the one year you had a few extra dollars to splurge on a Starbucks pumpkin maciato. Of course the question still remains. Why am I still poor, while others are getting richer? Is it because

6/ A glutton for punishment.

10/Too busy boning the hole in the wall to care about my own self worth.