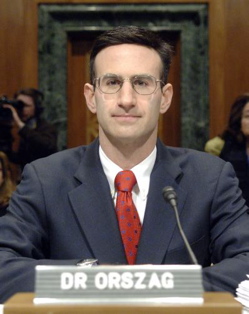 How to manage the country when you can barely manage your own afffairs.

Get ready for a lot of syllable-laden names: Barack Hussein Obama’s budget director Peter Orszag’s ex-girlfriend recently gave birth to their daughter, Tatiana Zoe. This girl’s birth comes on the heels of her father’s recent engagement to Bianna Golodryga, the hottie of ABC News. Tatiana has been labeled a love child, and her mother, Claire Milonas is the jilted woman, abandoned by her hotshot boyfriend when she was three months pregnant. It’s all terribly illicit – but, somehow, not very exciting.

Where are the bizarre Appalachian cover-ups? The illicit trysts in unsavory public places? Orszag released a statement saying he wished Claire all the best, and that they had been broken up long before he started his relationship with Golodryga. Sources confirm that that’s true.

There may, of course, still be extensive media coverage of Peter Orszag’s personal life for the foreseeable future. But what the country should be paying attention to at this point is his professional life. Having a child is a time consuming endeavor, especially when the parents aren’t living together. Add to the equation a new girlfriend, a wedding and two kids from his first marriage and it adds up to a boiling pot of crap and stress soup.

In case anyone forgot, Orszag is the Director of the Office of Management and Budget, which is its own cesspool of misery. There’s a lot at stake with a job like that. Orszag graduated magna cum laude from Princeton University and got his PhD from the London School of Economics, so he’s clearly a bright, young man with all his reflexes and mental faculties intact. But if a taxing lunch hour can knock me off my game, what is this entire mess going to do to poor Peter? What is it going to do to his three children? His fiancé? She’s only 31; does she hope for children of her own? What will having more little Orszags running around do to their sperm factory father?

America’s budget needs a hell of a lot of management, and there are a lot of crying mouths to feed in this picture.

But there is one character in this sordid plotline that stands out as a quiet compass of moderation: the mother of his two oldest children, Leila and Joshua. She has not released a catty statement to the press and, judging by the fact that her name is omitted from all the articles written about her well-known ex-husband.

Should be interesting watching Mr Orszag budget the country when he can barely ‘budget’ his own affairs.