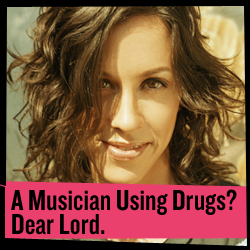 Looking for inspiration in America.

According to an interview with High Times magazine, Alanis Morissette openly discussed her marijuana usage and put it up on a pedestal, as she praised the herb in aiding her with her creative process.

“I’m all about moderation – as best I can be. As an artist, there’s a sweet jump-starting quality to it (marijuana) for me. I’ve often felt telepathic and receptive to inexplicable messages my whole life. I can stave those off when I’m not high. When I’m high – well, they come in and there’s less of a veil, so to speak. So if I even need some clarity…or a quantum leap in terms of writing something, it’s a quick way for me to get to it.”

Was she on the green stuff when she gave this interview? Is she saying she’s telepathic and inexplicable messages are transmitted to her on a daily basis? How much is a quantum leap in writing? Isn’t what she’s trying to say in high-tongue, is that she has writer’s block sometimes?

In recent times, she hasn’t found much success and fame with her songs like she did in her golden days. Also in 2007, she uploaded a video of herself singing a slow-version of Fergie’s “My Humps.” She didn’t offer any explanation but later stated while recording songs, “…every song was this tsunami of emotions. So I said, ‘I wish I could just write a really simple song—a song like ‘My Humps.”

A reasonable explanation really, but it came after an uncomfortable amount of time. Did the weed delay the response? Is her weed use the reason behind no number 1 songs and the video?

Drugs and art go hand in hand especially if you believe in your own myths.