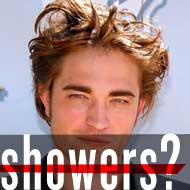 Picking on pretty boys in America.

In case you haven’t noticed, Robert Pattinson is a very pretty boy, almost too pretty (but that’s public taste for you). Naturally, when you are overly pretty you are bound to make most of America weep, swoon, salivate and try very hard to commoditize you into the sex symbol you always craved to be. Bingo! This morning’s edition of NY Mag is going for a counter-pseudo-intellectual level and we couldn’t resist sharing it with you.

We’ve all heard that Robert Pattinson doesn’t change his clothes more than once a week and is kind of smelly (just Google “Robert Pattinson smells” if you don’t believe us), but it turns out it’s all a strategic move to foil the paparazzi, as we learned at the Cinema Society and D&G-hosted New Moon premiere on Thursday.

Nurse Jackie star Peter Facinelli, who plays Robert Pattinson’s father in the Twilight movies, takes credit (blame) for Robert Pattinson’s rumored body odor problem. “He’s smart, because if he doesn’t changes his clothes and the paparazzi get pictures of him in the same outfit all the time, then they can’t sell the pictures,”

Stellar idea. We don’t change our clothes because we only own the one pair of Mick Jagger sweat pants we bartered for at a junk ad hoc shop.  We do kind of get the feeling that people are always looking at us, too. But Robert, my dears, unlike us, is a glamour hunk boy (well truth be told we are glamorous in our own insidious way…)

Truth be told, you can smell us coming too, but if we could encourage Robbie to wear his own bygone smelly Mick Jagger sweaty sweat pants he’d get more attention too.

Being sweaty, smelly and famous go hand in hand especially if you are pretty boy toy. Oh well…