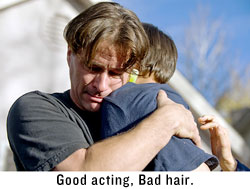 The father of the family involved in the Balloon Boy hoax is in a spot right now. It appears that one of his colleagues sold Richard Heene’s whole dirty story to Gawker (classy), declaring Heene paranoid and extremely delusional.

“…he was motivated by theories I thought were far-fetched. Like Reptilians — the idea there are alien beings that walk among us and are shape shifters, able to resemble human beings and running the upper echelon of our government. Somehow a secret government has covered all this up since the U.S. was established, and the only way to get the truth out there was to use the mainstream media to raise Richard to a status of celebrity, so he could communicate with the masses.”

Come on, Richard. Using the Reptilian Alien excuse for your fame obsession? That’s just low. Those guys have enough on their plate as is.

According to the story that Robert Thomas (the tipster) gave the media, the entire Balloon incident was perpetrated to attract attention to Heene’s family, and thus boost the chances of his reality television show being picked up by a major studio. Well, played Richard.

Police officials searched the Heene home Saturday night and carried away with them three boxes and a computer.

“We were looking at Class 3 misdemeanor, which hardly seems serious enough given the circumstances,” Sheriff Jim Alderden said, expressing disappointment. “We are talking to the district attorney and federal officials to see if perhaps there aren’t additional federal charges that are appropriate in this circumstance.”

Contributing to the delinquency of a minor and attempting to influence a public official are among the charges the authorities are attempting to prosecute the Heene Adults for. All this adds up to a Class 4 Felony in the name of Fame.

Is this really what is happening in America right now? Reality TV’s hold on the american people is so strong that they are willing to risk the well-being of their entire family (poor children!) for D-List Stardom? Do not try adusting your television sets, there is something seriously wrong with this picture.

Sheriff: Charges To Be Filed In Balloon Saga