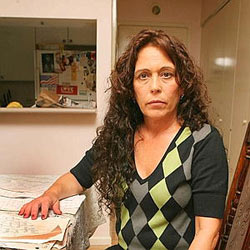 When going against the tide can nearly land you a chair in your face.

According to the NY POST (TRASH) pandemonium ran amok as Theresa Ciccione took on the role of ‘coveted renegade juror and much maligned bitch.’ ’The reason? After a month long deliberation as to the culpability of MERCK as to the disclosure of nasty side effects (yes one of those drugs kids….) Ciccione, an aspiring ‘fighter for the people of America’ refused to budge when all the other 7 jurors demanded that she side with them and exonerate Merck.

Theresa, despite the irate, desperate pleas from her fellow jurors who were probably just desperate to return to their former lives (before they became judicial slaves) decided instead to stick to her conviction that after all is said and done MERCK are scumbags, capricious liars and if more chairs get thrown at her head she will inevitably survive as the woman who saved America from Merck, itself and of course in all good likelihood get to star in her own reality show- ‘Lone Hold Out.’

“There were e-mails that Merck knew about these effects since 1999 and they weren’t putting any warnings on the drugs,” said, Ciccone, 53, of Chelsea. “On the first day of deliberations, [the other jurors] were sure Merck was right. To them, Merck was gold. Merck was God.”

Could it also be that Ciccione is also God now? Unwilling to budge and committed to the idea that Merck like every made for action conspiracy movie is really a villain in disguise forced the judge to order a mistrial and you know what that means Ciccione will be coming back to court – if the law would only allow her…

In any event it’s good to know that as a small guy you can always stand by your beliefs, flying chairs from disgruntled fellow jurors aside.

When you are in the mood to save America from itself it’s always a good idea to become a renegade juror.