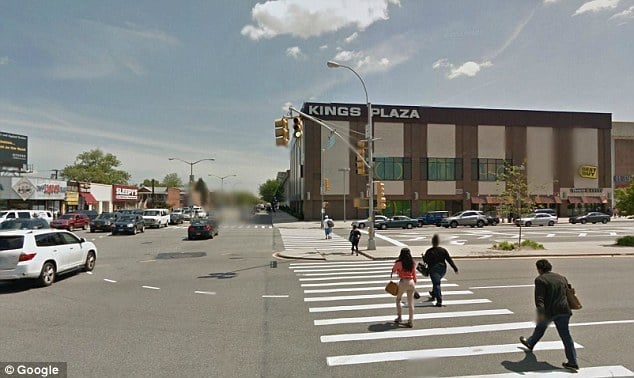 A white couple, Ronald Russo and his wife, Alanna, both 30 have gone on to claim that they were beaten by a band of African American youths in a racially motivated altercation.

It all came to pass this past Monday when the couple came to be stopped by a throng of teenagers at Brooklyn’s Avenue U and East 58 st near  Kings Plaza Shopping center whilst they had the green light.

Unable to pass by in their motor vehicle, Ronald Russo began to honk his horn. Agitated the throng of African American youths, ranging from ages from 12 to 18 began to kick Russo’s car.

Yet things only got worse when Ronald Russo got out of his car purportedly to assess damages.

It was then that Russo was dragged to the ground and the youths began kicking and punching his head.

Ronald Russo has since gone on to claim during the attack, the youths started shouting racial slurs at the couple including ‘white motherfxxxxx.’

Court papers also went on to tell the youths screaming the following as well: “Get those crackers!”

“Get that white whore!”

Whilst calling 911, Alanna Russo went on to be singled out by a 12 year old girl who grabbed her by the hair and threw her onto the ground.

The nydailynews goes on to tell that two youths, Kashawn Kirton, 18 and Daehrell Finch, 17 went on to be later arrested in a nearby parking lot.

Told Kirton who claimed he was not involved in the attack:

‘I have relatives who are white. Cousins and stuff,’

‘My school is mainly white. More than half of my friends are white. I wouldn’t use words like that.’

Wpix goes on to tell that Kirton was charged with gang assault, harassment, and menacing charges – all as hate crimes. He was released on $50,000 bond and has no prior arrests.

Finch also faces gang assault, assault, menacing and harassment but they have not been labeled hate crime charges. Finch’s prior record includes assault, theft of services and trespass charges and he is being held on Rikers Island.

Police are still looking for six more suspects in the case.

A neighbor told a nydailynews reporter who had come to interview the victims at their home that he’s seen no racial tension in the area. But “it’s different” near the Kings Plaza mall.

“It’s not just a black and white thing. It’s stupid teenagers thinking they can do whatever they want,” the neighbor told.

Some commentators on the web are divided if this was indeed a hate crime or just a situation of heightened aggression after Ronald Russo became impatient and started honking his horn. Interestingly others have unabashedly gone on to denigrate the African American community.