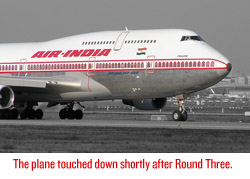 When flying with AIR INDIA means taking extra chances with your life.

Most of you are probably so acclimated to flying that at this stage of your lives you think nothing of it and quickly awaken out of your extended naps once the plane lands to your expected destination. Not so this weekend where 106 terrified passengers looked on as the cabin crew and the cock pit crew suddenly came to blows 30 000 ft up in the air. Delicious you say? We say scrumptious…

Reports the TIMES OF INDIA-

The cabin crew alleged that pilots harassed a 24-year-old female colleague who later filed a molestation complaint against them with the cops after the flight landed in Delhi.

The pilots, on the other hand, accused a male flight purser of misconduct that seriously compromised flight safety, and said the accusation of molestation aimed to protect the complainant’s purser friend—who has a commercial pilot license (CPL)—from facing action.

No party denied that blows and abuses were exchanged as bewildered passengers looked on. Sources said that the female cabin crew member and the co-pilot sustained bruises.

BRUISES? The last time we ever sustained bruises on any flight was when we were getting off the plane and in our exhilaration to be land bound nearly bounced off the tarmac.

And the report continues…

There were unconfirmed reports that at one stage the cockpit was unmanned, as the crew was busy fighting outside. Things allegedly degenerated to the point where the captain threatened to divert the plane to Karachi, likening the situation, sources said, to a “hijack”.

Really, who needs to be watching the clouds or the TV in front of them for entertainment when you have cabin crews and cock pit crews chasing each other around the plane, while the plane is unmanned?

But how did it start? We’ll tell you-

“She hit the cockpit door with such force that she started bleeding. When Amit Khanna, the purser, saw her in this condition, he went to the cockpit to ask what was happening. At this point, the pilots got abusive and started a fight with him,”

Are you sure you’re not pulling my leg?

Khanna, the source added, entered the cockpit angrily and that’s when the fight started. “He became abusive, and tempers ran high in the cockpit. Given the highly unsafe situation there, the commander said he would divert to Karachi, to which Amit retorted, ‘Jahan le jaana hai, le jaao, is aircraft ko main bhi uda loonga (take it wherever you want to, I can also fly)’,”

Are they going to charge us for all this onboard free entertainment? After all it’s not like I mind, but at least they could have the decency to let us know before we boarded the flight. And finally:

Air India sustained a major embarassment, and every crewmember involved sustained some damage to their careers, which have been grounded pending an investigation.

When you want to be a reality air actress, sometimes it’s better to write it into the script. That way when the ‘shit’ happens everyone can laugh in with you and have a free swing as well.