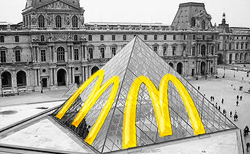 When the American fast food giant opens its doors at the Louvre you know France has gone to the dogs.

It seems that the French have committed the most ultimate faux pas possible- they have allowed a fast food giant to claim its imperial hold on the vanguard of high culture- the Louvre. But to be sure let’s understand that it wasn’t the Americans who pushed the idea of opening a Mcdonald’s at the foot of the Louvre but the French themselves!

According to this morning’s Daily News (the soft version of NY Gutter News, of course by now all our readers know the top honors go to favorite scum bags Gawker and NY Post) Mcdonald’s is set to open its newest franchise, not on the outskirts of Paris or even near the 3 or 4 or other Mcdonald’s clustered up and down Avenue Champs Elysées but get this; at the foot of the Louvre, which the Daily News counts will mean;

‘that soon the first sight the Louvre’s 8 million annual visitors will encounter won’t be the “Winged Victory of Samothrace” but the Golden Arches of Oak Brook, Ill.’

Yummy! Now that’s a loud burp we can all give sustenance to! The French who spend their whole lives ridiculing America and by extension the rest of the world for their appalling cultural scene have, by adopting Mcdonald’s as the new ‘arc de symbol’, nullified any semblance of coherency or self respect that one may have once adorned on them.

Reportedly the highest consumer of junk food outside of the US (this coming from the girl who keeps telling us she is a gastronomical snob (flop?)!

As for the workers at the Louvre?

The NY Daily had this to say:

‘….were aghast, quoting an art historian fretting about “the very unpleasant odors” that might waft through the distinguished old palace.’

The moral of the story: Never ever listen to a Frenchman ever again.  He is, whether or not capable of appreciating it, the biggest phony in the world. But you already knew that didn’t you?