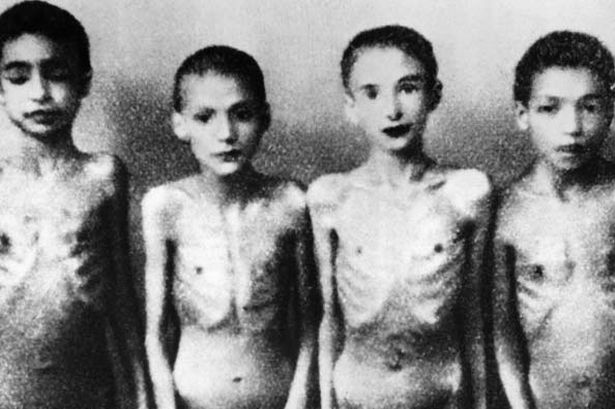 Fuquay-Varina High School biology teacher Ray Fournier has infuriated school authorities and parents and now risks losing his job after writing an inflammatory article comparing his school to a Nazi prison camp and ‘spiritual gas chamber‘ that ‘poisoned’ one girl into becoming a lesbian.

In the piece for online Christian parenting magazine No Greater Joy, (is the irony more palpable?) Ray Fournier urges parents to ‘rescue’ their children from public schools and called his own school ‘a concentration camp dedicated to the spiritual death of those imprisoned behind these walls,’  the local News Observer reported.

In his article, Fournier claims to be ‘a missionary masquerading as one of the ‘guards’…an eyewitness to the daily indoctrination and spiritual torture that is inflicted upon those who have been sentenced to come here by their own well meaning [sic] parents.’

Fournier complains that ‘evolution based [sic] science classes,‘ like the one the school district hired him to teach, ‘discredit the reliability of the Bible and get rid of God as Creator.’

‘History classes,‘ he continues, ‘get rid of God as Sovereign King and demonize Christianity. English classes reinforce this message through the literature they assign their students to read,‘ although he provides no concrete examples of how they do so.

Adding: ‘This deliberate indoctrination encourages students to break each and every one of the Ten Commandments which leads to countless numbers of our own children down the broad road to spiritual destruction.’

In an attempt to further accentuate his argument that public education is not religiously neutral, but ‘rather deliberately indoctrinating students to turn away from God and moral and ethical living,‘ he takes umbrage with a family that home schooled their daughters until high school.

Fournier writes he ‘warned them about the spiritual dangers of public education, but sadly they ignored my warning.’

“It was as if their daughters (were) placed inside a spiritual gas chamber. It didn’t take long for the poison to take effect,’

“Within a year’s time, one of them even became a lesbian. My heart broke each and every time I saw her walk around campus with her girlfriend,” Fournier wrote.

Although never explicitly mentioning Fuquay-Varina High, where he has taught since 2000, it didn’t take long for students and administrators to put two and two together.

The magazine has since swapped the controversial piece with an apology from Fournier, though it still retained the original headline, ‘From Behind Enemy Lines.’

Tells the apology: ‘In retrospect, it was not wise for me to use the analogy of concentration camps and the holocaust to illustrate the loss of millions of children from Christian homes to the world … as a result of the media, the public school curriculum, and the student culture,’

‘It is a fine line to walk for a man trying to speak the truth in a way that would awaken Christian parents without having the method of communication over-shadow the message,’

‘Concentration camps and the Holocaust are real horrific events of history.’

Despite the teacher’s apology, calls have been made by parents and students have Ray Fournier fired.

‘Anyone who talks so poorly of my school, compares it to a concentration camp, blames the public school system for ‘turning people lesbian’ and (says public education) makes teenagers lose their morals is outright ridiculous,’ Lauren Foster, a Fuquay-Varina senior, told the News-Observer newspaper.

A Wake County schools spokesman Lisa Luten has since told via abc11 that they are still standing by the biology teacher pending further investigations.

In his apology, Fournier said he regretted the Holocaust analogy, but didn’t back away from his condemnation of public education.

‘As a result of my study of God’s Word and the testimony of my experience, I still believe and stand by my convictions regarding having Christian parents rescue their children from the public schools,’ he said.

To date Fournier has not been fired but that too might be a matter of time….

As you may recall I was one of your students last year. This article was especially shocking to me because, well you’re a science teacher after all. In my opinion religion has absolutely nothing with education. If someone wanted to learn about the Bible they could easily go to a Christian school. Same goes to you. There is no reason to complain about “the spiritual destruction of children” when you work at a public school.

I feel if you have a problem with the way our school educates us students, or us students act toward religion and sexuality, that you should just pack up your things and leave. No one will be willing to change their personal life and or beliefs just because one person feels it’s not right. And for the religious part of your article, everyone in this world has their own right to what they do and what they don’t believe in. But that doesn’t mean you should discriminate and lash out if someone’s belief is different than yours. If you’re a Christian that’d great, if you’re not that’s great also. To each their own. In my understanding of God and or Jesus christ, their main goal was to spread love and acceptance. Not discrimination and judgement. As I said before, if it disgusts you so much that us children are on some path to spiritual destruction, then just leave. No one is making you teach at a public school.

Watch the book trailer for Ray Fournier’s Education Reformation below.