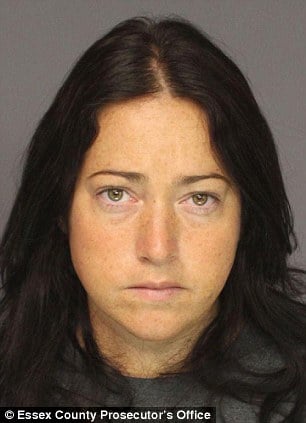 Nicole Dufault a NJ high school teacher has been arrested on accusations of sexually assaulting three 15 year old boys in her car at the school she taught as well as two other 15 year old boys.

The 34 year old mother of two has since been charged with several counts of aggravated sexual assaults and endangering the welfare of a child reports NJ.com.

Essex County prosecutors told that Dufault who taught language arts at Columbia High school for 9 yeas assaulted the boys during the regular academic year and summer school between 2013-14.

The encounters are said to have occurred in Nicole Dufault’s car and on school campus in Maplewood, NJ, and included oral sex and intercourse told authorities.

Since the charges have been levied, Dufault’s minor children have been removed from her custody. She had recently separated from her children’s father.

Told Jennifer Berkely a Columbia HS parent: ‘I don’t understand how someone can’t pick up the clues for something like that or how any one of those kids would not have said something before now,’

‘It’s really surprising to me.’

Added another parent: ‘They do background checks on the teachers, so I don’t understand,’

Told Columbia HS student, Julia Uhlman: ‘They’re 15, not even 17, 18, not even high school seniors. That’s appalling. She should be fired.’

Reiterated a neighbor, Maureen Messina who knew Dufault for 6 years: ‘Seemed like a, you know, just an average mom going to work,

‘Not only did she destroy her life and her children, but the boys who are involved as well,’

Offered another neighbor, Nancy Ursetti: ‘She was so gentle with those children, she seemed like the best mother,” Ursetti said, “If you can’t trust her it’s like, ‘oh, my gosh.'”

Dufault is being held at the Essex County Jail in lieu of $500,000 bail, she has since pled not guilty to the charges.