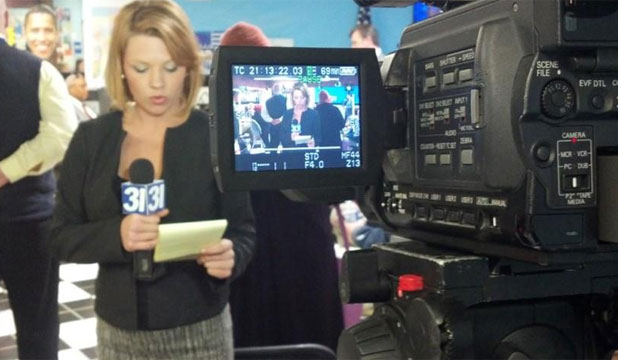 In the aftermath of darling tv reporter Shea Allen having her ass canned for perceived indiscretions comes a damning report where the WAAY reporter had actually more going on than simply appearing on tv with her nipples too erect for the world to sloth over.

After being fired yesterday for reposting a blog championing her hell or fury brand of journalism, which her employer asked her to take down, Shea Allen went on to nonchalantly tell she really couldn’t figure out why them bixches fired her.

“I had no earthly idea. It was just me being my usual, snarky & cynical self.”

Not so tells gawker: But a former co-worker told Gawker that Allen’s confessional was merely “the straw that broke the camel’s back.”

According to the insider, Allen’s first offense was a literal one: She was arrested back in January 2012 on an unspecified warrant — just a few months after joining WAAY-TV.

Earlier this year, the insider says, Allen was suspended for three days for dropping an F-bomb on the air.

She allegedly followed that up with another warning for running a news package “that contained profanity and racial slurs.”

Additionally, Allen has admitted to repeatedly falling asleep on the job, and (maybe) stealing other people’s mail.

Kids tell me you’re not gushing in stupor and licking the back of your eyelids? But then again who can really be so disturbed that our collective vixen is simply being her kindred ‘snarky’ self. What’s a homicidal report without a touch of sass and snide and of course her own criminal endeavors?

Continues gawker:  “Shea has been a ticking time bomb for termination,” the sources tells us.

It’s worth noting that, despite her alleged and acknowledged missteps, Allen was nominated just this year for two AP Southeast awards.

And two other former colleagues who spoke with The Blaze praised her trustworthiness and tenacity.

Tenacious of course might be an understatement. But then again it seems Shea Allen has her boardroom of fans, so can we really fault her for individualistic streak?

Meanwhile our collective vixen went on to tweet the following yesterday:

“I feel what I do in my personal space is protected by the First Amendment,” she said.

As for what’s next, Allen doesn’t quite know, but she’s determined to remain in the field.

“For God’s sake I just want to tell the news.”

What do you think gawker? Surely Shea Allen will go a long way in giving you the media legitimacy that you all espouse unless of course there are a bunch of other brave media suitors getting ready to bring on the spunky sass bixch that journalism these days adores.