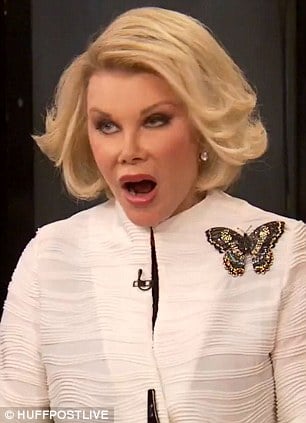 Jumping on the bandwagon of browbeating beleaguered morning show, NBC’s ‘The Today show’ is comedienne Joan Rivers who this weekend spared no punches as she laid into former Today show co anchor, Ann Curry.

“Ann Curry?  With all due respect-,” before making a loud snoring sound.

Rivers then went on to exaggerate Curry’s interviewing style with the following put down:

From there Rivers dabbed fake tears from her eyes before telling Lamont:

Although Matt Lauer has been lambasted for Curry’s ouster and the show’s rating nosedive, Rivers went on to defend Lauer by remarking the following:

“I think they’re blaming it all on him and it’s very unfair.”

Yet not to be totally off base and to concede that Matt Lauer doesn’t always have the perfect chamomile tea manners he portends to have, Rivers did go on to mention that Curry’s “a very nice woman and I’ve heard Matt is a toughie.”

Reflected Rivers as to what has been running amok at the ‘Today show’ she offered the following:

“it’s being run by a lot of white men” who went to Ivy League schools and “didn’t keep up with the times.”  Declared the goddess of oxymorons, “You can’t sit on your laurels.”

Rivers went on to mention that Today’s morning show rival Good Morning America, on the other hand, “is kicking butt.”

Of course who’s really kicking butt and a dead horse is Joan Rivers, who may be more dead than the ‘The Today show’ that she’d care to admit to…