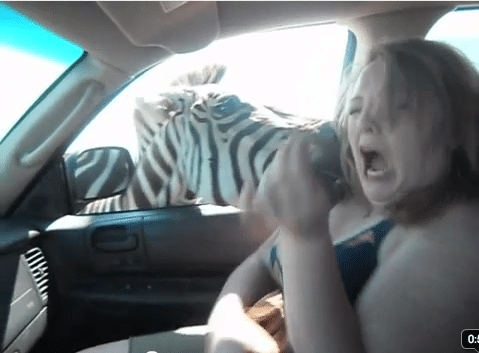 Really it couldn’t get more black and white than this shit. Things that go on whilst you’re being interviewed live on the Today show….

Kids have you ever been anywhere near a wild animal with a bowl of food in your lap? Could you imagine the sight? Personally I could never imagine the sight. Why? Cause my ass would never be stupid enough to have a bowl of the good shit in front of a wild animal (and that does include a zebra as well as the occasional roused up family cougar or whatever you like to have nuzzle with you under the pillows). Then again that didn’t stop this one wack bixch from nearly jumping out of the car window after Hungry the hungry Zebra got a eye full of some wack bixch eating.

That’s when Hungry thought to themselves; “Nigga I’m hungry. Never mind, I’ll just bite this bixch’s shoulder. I’m sure it’s delicious, but I’ll have to roll it in some pig urine down the street to make sure it tastes up to snuff.”

To which wack bixch lets out a loud bellow of existential despair. But in slow. Motion.

“Did you see that bixch bite my shoulder? It huuuuuuuuuuuuurt.”

Could you repeat that to yourself singing in the shower over and over but in slow motion? I know I’d have no way of making it. I’d probably drown under all that cucumber daffodil shampoo my ass has to use to keep me respectful and shit.

Oh dear the moral of the day: Black and white. Never eat a bowl of the good shit. Infront. Of. A. Zebra. OR THE BIXCH WILL EAT YOU!