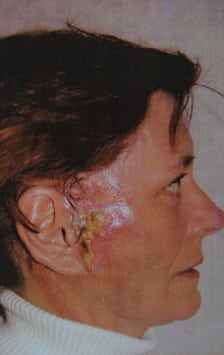 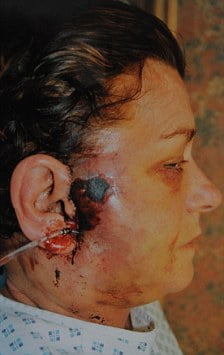 Things aren’t going too well for one 65 year old woman after a nurse removed her bandages pursuant to a routine facelift. How bad you wonder, let’s look for some new bandages and read on…

dailymail.co.uk: A woman won £15,000 compensation over a botched facelift after her cheeks bulged up and she was left looking ‘like a chipmunk’

Denise Maitland said the nurse who removed the bandages after the operation ran out of the room screaming ‘Oh my God’ when she saw what surgeons had done.

Which if you ask us isn’t necessarily the best affirmation you could be hoping for if you just happen to be the patient.

But after suffering heavy bleeding and complications, she has been left having to wear heavy make-up to hide her scars.

Retired office administrator Denise said: ‘I was seduced by TV programmes, I was fascinated seeing women being transformed by surgery.

‘I used to watch three a week and eventually I sent off for a brochure.

‘I had all these rings of skin around my neck but I wanted to look lovely and young again.’

Fascinated? How about appalled? But then again don’t we all want to look younger? Some of us at almost any price…

Denise checked into a clinic in 2005 for the two-hour procedure which the couple spent £5,000 of their savings on.

Her surgeon examined her after the op but did not remove her bandages – and failed to spot heavy bleeding.

Denise was rushed back to hospital and underwent an emergency operation to save her face. She spent two years being treated by specialists – and blaming herself for her ordeal.

Blaming herself? Who else should she also be blaming? Her husband who plunked their life savings so he could have a brand new looking wife? The doctor for malpractice? The beauty industry for inferring that it is a rite of passage for every woman to have a face lift by the time she’s 19 or the chipmunks scurrying in our office who have been begging us for their own facelift?

‘I’m still living with the scars. I shouldn’t have had surgery in the first place. I was influenced into thinking it’s an easy procedure but my face is ruined.

‘I absolutely regret having it done and I’d advise other women to think twice before having any sort of plastic surgery.’

One day sometime into the future when Denise Maitland is walking past a window pane reflection of herself she will stop and wonder as she catches her reflection- “sometimes accepting oneself for whom they really are is not a bad idea but in any event, let’s hope the window pane infront of me doesn’t suddenly crash and smash me on the face because frankly I think I’ve had enough of facial reconstruction to last me a lifetime.”