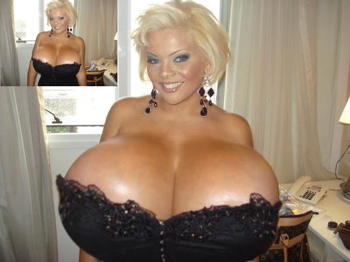 Sheyla Hershey would like to let you know her giant fake breasts saved her life.

If you thought you’ve heard and seen it all on this pesky world wide web well think again. A crazy woman who goes by the name Sheyla Hershey, no I didn’t make that up, wants the world to know a little something about her. Yes, she’s a Brazilian model but no, that’s not her news. Yes, she’s had more plastic surgeries than Heidi Montag, but no, that isn’t her news either.

Ms. Sheyla Hershey wants us all to know that she is the owner of a pair of 38KKK boobs, the world’s largest ever.

But while Hershey has been trying to become a silicone superstar, Fox News reports that she’s in fact contracted a staph infection while under the knife to make her breasts bigger. Doctors say the infection has spread to both implants and must be removed. Even her real boobs may have to get cut off, and then she’ll be left with nothing but two backs.

“I had large fever and painful. I just couldn’t breath properly; it was terrible! I was in bed all day, couldn’t get up. I want to look better each day, every day. Everybody’s got a dream inside, you know? And it’s good when you can make your dream come true.”

So, what the heck was her dream? Because being the woman known for having the world’s biggest boobs won’t get you very far. I mean you could maybe get a reality show out of it, but that wouldn’t last long at all.

Hershey went into surgery this past Tuesday. Is anyone else curious to see her before and after picture? (assuming she makes it out of surgery…)