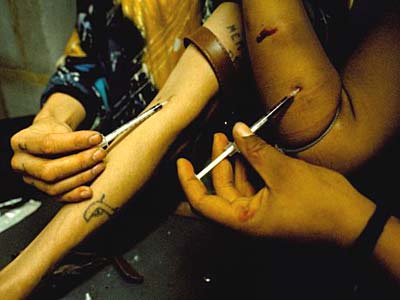 For a while the snorting and the shooting continues while I sit there with a manuscript that I wanted Jamie to look over. At first inclined to leave, Jamie insists that I stay.

“Did I tell you about the time I held that guy up and pistol whipped him,” Jamie suddenly retorts.

The couple whom I later find out he has only met twice before through a mutual friend don’t know what to exactly make of Jamie but perhaps od my continued presence they remain calm if not a little skewered themselves.

“Yeah, we had this tip, that all this barge was coming to town and it was easy money.”

Part of me doesn’t know whether to believe him or whether he is putting this on all for show. He continues for a while until the vodka is finished and the couple suddenly realize that they must be on their way out.

The first thing Jamie will tell you is when he wakes up is how he has to hustle for the dealer to make it over. He used to keep some hidden for the morning, but that became too hard to keep away so now despite the aggravation of having to wait for the dealer to arrive or even pick up he just calls him. As I’m listening to him I half wonder how he manages to write the way he does, but according to Jamie- the drug helps him go to territories that he may otherwise may stay away from. By this stage we are talking about his ex wife and the current girl friend that wont return his phone calls and some manuscript that he’s been working on.

For a while he considers what he has said before suddenly nodding off to sleep. I stand there not sure what to do, before turning to now leave myself. I leave my script on his table, do him the courtesy of putting the empty vodka bottle in his recycling bin and stare gingerly at the needle protruding by his bedside as I finally close the door behind him.