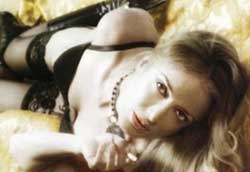 Cashing in on scandal, drama in Italy.

Meet Italian prime minister Silvio Berlusconi’s worst nightmare, his ex-call-girl girlfriend Patrizia D’Addario, who has an upcoming memoir coming out that promises to be a sizzler. Just in time for the holiday season.

Shiny, blonde, and rather leggy, this princess has managed to call the last shot on a man that is forever used to calling the last shot. All this accomplished with her upcoming memoir simply titled ‘Gradisca, Presidente’ (Take Your Pleasure, Prime Minister). As delectable title and revenge artifact as ever we have come across.

In her yummy effort, Patrizia makes some compelling claims, claims that could lead to him losing immunity from prosecution which would be devastating as his hamstrung reputation is already spiraling dizzily out of control. In her memoir, Blonde Dynamite claims that our favorite Italian prime minister has ties to the mafia (like us…) and how “she spent the night of the US election a year ago with Mr Berlusconi, subsequently giving magistrates in Bari audio and video recordings of the encounter.”

Continues the London Times (because like us, you enjoy the goings-on of sordid affairs)

Ms D’Addario also described being taken to Palazzo Grazioli, Mr Berlusconi’s residence in Rome, and being briefed on his sexual tastes by Gianpaolo Tarantini, the Bari businessman under investigation for allegedly paying women to attend parties given by Mr Berlusconi and other VIPs.

How sweet of Gianpaolo. The Times then goes on to recount some delicious episodes of brutality: police trying to run her off the road and her underwear being stolen.  The article then continues in it’s modesty to claim;

Ms D’Addario is also preparing to appear in a film called Escort — the Girls of Palazzo Grazioli with Barbara Montereale, one of the other 30 young women who allegedly received cash and jewellery to attend Mr Berlusconi’s parties.

As of press, Mr.Berlusconi surely is busy squirming and deploring the idea that he is being attacked mercilessly from all political sides and that Ms D’Addario is a shameless tramp ho looking for a free ride.

Italy has wonderful coastlines, wines, and food.However, mess with its women (call girls) and… well, Hell Hath no fury…

What Your Birth Date Tells About Your Destiny